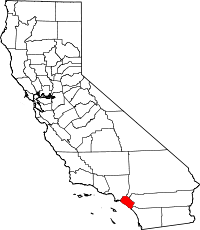 A panel of Superior Court judges has challenged a controversial 2011 Orange County law that bans sex offenders from parks, beaches and even some roadways and asked the state Court of Appeal to review the measure.

On Friday (Nov. 30), the district attorney’s office, which has pushed cities across the county to join in adopting a version of the sex offender ban, vowed to continue enforcing it, the Los Angeles Times reported.

“I believe that protecting children from sex offenders is one of the highest priorities in law enforcement,” District Attorney Tony Rackauckas said in a statement.

But Sheriff Sandra Hutchens has asked her department to stop enforcing the law, and Lake Forest, one of many cities that adopted its own ordinance, is considering repealing it.

The judges overturned the conviction of Hugo Godinez, a registered sex offender who was ordered to serve 100 days in jail for attending a Cinco de Mayo party at Mile Square Park, a county facility, in Fountain Valley in 2011. Noting that restrictions on sex offenders are up to the state Legislature, the judges certified the case for transfer to the state Court of Appeal, which has until Dec. 15 to accept it.

Since 2011, nearly half the 34 cities in Orange County have adopted a version of the county ordinance, and of those, almost half are being challenged in the courts.

To persuade cities to enact their own laws, the district attorney’s office has sent ranking prosecutors and administrators to city council meetings to talk with municipal leaders.

“The effectiveness of this law will never show up on a statistic,” Susan Kang Schroeder, chief of staff for the district attorney, said in a past interview. “Because a sex offender did not show up in a park, a child did not get raped or molested.”

“Such a patchwork of local ordinances poses tremendous risk to the offender who may not be aware of each regulation in each city, or indeed even know the precise location of city borders,” the judicial panel ruled.

The decision also says that the county law is detrimental to citizens, and that “any gain to an individual local community from its own specific ordinance is outweighed by the substantial risk to the transient citizens of the state.”

Lake Forest, which enacted a sex offender ordinance in January, will consider at Tuesday’s City Council meeting whether to become the first city to overturn its law.

A city report said that the ordinance has not had an “appreciable effect” because there is a small population of sex offenders in Lake Forest, deputies have yet to cite anyone for breaking the law and the sheriff has been effective in monitoring registered offenders in the area.

The city report also said that there appears to be a “consensus” developing in Orange County courts that the law cannot be upheld.

Fountain Valley has decided to delay enacting the ordinance, said Alan Burns, the city attorney. The city of about 50,000 initially approved an ordinance in October, but the action went no further.

Though Mile Square Park — where Godinez attended the Cinco de Mayo party — is in Fountain Valley, the facility is county parkland and subject to county rules.

Critics of the ordinances, such as Janice Bellucci of California Reform Sex Offender Laws, say that the ruling from the judicial panel paves the way for registrants to visit parks, beaches and harbors without the fear of being arrested or fined.

“As far as the sex offender laws, I think it’s the beginning of the end,” she said.

Schroeder said Friday that the prosecutors’ office realized that getting the ordinances passed would be difficult. In the last year, Schroeder has attended council meetings to push cities to adopt a version of the county’s law.

On Tuesday, she said, she will be in Lake Forest to try to convince the city to keep it.