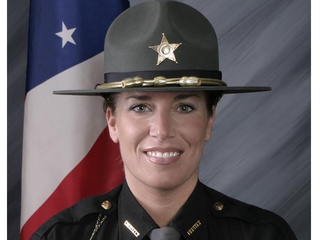 See today’s video, courtesy of WDTN-TV, Dayton, Ohio, that features an interview with Charles Bauer, father of Deputy Suzanne Hopper who was shot and killed on New Year’s Day at an RV park in western Ohio.

Law enforcement officers around the world join the family of Suzanne Hopper in mourning the loss of the mother of two and 12-year veteran of the Clark County Sheriff’s Department.

Hopper was killed when she responded to shots fired at the Enon Beach RV Park Saturday (Jan. 1). It ended when the gunman, 57-year-old Michael Ferryman, was killed. Investigators have yet to say if Ferryman killed himself or if deputies shot him.

Hopper’s father, Charles Bauer, expressed compassion when asked about Ferryman. “I think that things like this happen for a reason. I think each one of us has something we need to take away from this that will help us in our daily life going forward and I know we don’t know much about the person that committed this act but we know that he was another human being created as we were in God’s image and even though he did a dastardly deed my thoughts, my beliefs are I hate the sin and love the sinner, ” Bauer said.