Defenders Line Up for RV Use on N.J. Beach 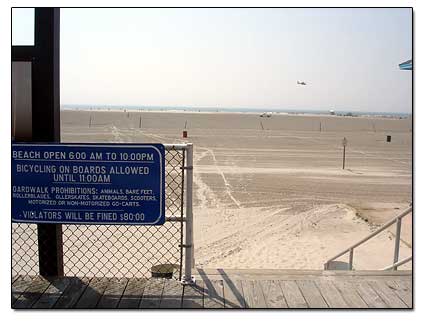 A view of a fraction of the beach at Wildwood, N.J. Photo courtesy of www.cozybeach.com.

While residents have been fired up over Wildwood, N.J., city officials seeking to permit RVs on the beach, state and county agencies don’t see the plan as problematic.

“We don’t see it as an issue,” said Gerald Thornton, freeholder director of Cape May County Emergency Management.

Thornton said if there was an emergency situation, like the one Cape May County encountered last August with Hurricane Irene, these RVs would be organized and directed off the beaches first, Shore News Today reported.

Ragonese noted that if anything leaked from campers, it would have to be properly cleaned, but other than that, the DEP had no involvement in regulating RVs on the state’s beaches.

According to City Commissioner Pete Byron, Wildwood sought out a permit from the state to approve all aspects of the beach revenue plan, including hosting RVs on the beach. However, he said the permit was not necessary to allow RVs on the beaches, and the process is not regulated by the state.

“We’re allowed to do it without having any input from the state,” Byron said.

Byron said that a management company, Point Break, has been hired by the city to regulate the RVs. One major regulation, Byron said, is that all the RVs must be self-contained- meaning it has the capability of supplying electric, drainage and water without external hookups.

“People have a misconception of RVs,” said Byron. “These are going to be upscale RVs, not pop-up campers.”

Byron said Point Break will also be in charge of setting other regulations and rules for camping in RVs on the beach.

“People have to give it a chance, because they are going to be impressed,” Byron said.