Harry Beaupre was enjoying the sun at Nevada’s Topaz Lake during the Labor Day weekend of 2010 when he encountered a doctor who groused about the fact that he only used his expensive wakeboard boat and even costlier RV a few times per year.

Learning that the doctor had many colleagues with similar recreational setups, Beaupre hit upon the idea renting out otherwise-idle recreation equipment.

His lesson after his first summer in business: Demand outstrips supply.

Reno’s Northern Nevada Business Weekly reported that American Dreams Recreational Rental, headed by Beaupre and his wife, Lindsey, recently wrapped up its first full season brokering RV and boat rentals between owners and vacationers. Renters proved to be in higher demand than owners, as Harry Beaupre lined up just five RV owners willing to rent out their equipment this summer.

But he expects that fleet of equipment to grow as American Dreams builds its reputation.

“That is our main thing, having a few clients who we do a good job for,” says Beaupre, a Washoe Valley resident. “Once we have their RVs in our fleet, and they get them back in good condition, after a few years getting peoples’ trust we will have pretty good pool of owners. Almost everybody who owns an RV or boat knows someone who also owns and RV or boat. We just have to prove we can keep their machines safe.”

American Dreams Recreational Rental has little overhead outside of creating and maintaining a website as a virtual showroom where renters can view RVs and other equipment. Insurance is costly, but Beaupre says he adds or drops coverage on vehicles on a month-by-month basis to control costs.

Setting up insurance on rental vehicles also provided a crash course in the basics of the rental business, he says.

“They (the insurance company) have their own school for going through RV rentals, which also applies to boats, ATV and other recreational equipment. They got me started on the details of business and I just started finding people who want to make a little extra money with their boats and RVs.”

He found one owner through an RV repair shop, another through a referral. Owners can insure their vehicles themselves, but typically they are named as co-policy holders on a master insurance policy. Deductibles usually cost $1,000 so American Dreams charges a refundable $1,000 deposit on RV rentals.

The Burning Man festival provided the fledgling company’s biggest increase in revenues and also provided owners of low-end RVs a chance to rent out their vehicles. 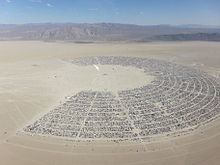 Aerial view of thousands of RVs parked in an informal campground at the Burning Man festival in 2010.

“Burning Man is a time where there are hardly any RVs to be had — if you have got anything that runs or moves, someone will pay money for it,” Beaupre says. “A lot of people won’t let their RVs go out there, but some that are normally not a rentable machine can go out to Burning Man.”

Beaupre says it was harder than he expected to find owners willing to rent out their RVs, and finding boat owners who wanted to take a chance on the rental business was even more difficult. Boat insurance also has much more stringent requirements, he says.

Most rented RVs were delivered on site, but some were picked up in around Carson City or Reno or at the Reno-Tahoe International Airport. Travel trailers typically rent for $100 to $175 a night, while luxury motorhomes rent for about $250 a night and up depending on size.

Although the vacation season is pretty much over, American Dreams hopes to see a few rentals around the holidays. Beaupre hopes relatives visiting from out of town might forgo a hotel room in favor of an RV that can be parked at an in-laws’ property.

“Our goal is to turn a profit on people’s assets that are already sitting around,” Beaupre says. “I know so many people that don’t use them all that much, and I just wanted to tap into that resource.”