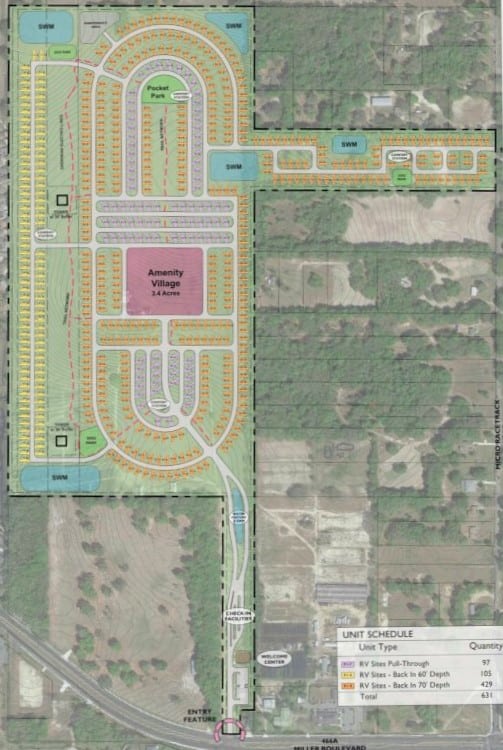 The Sun Recreational Vehicle Development park would offer sites for 631 RVs, including some permanent, mobile-home-like structures.

Two brothers of a longtime prominent Villages official are hoping to bring a large-scale RV park to the outskirts of Fruitland Park, Fla., and the city commission isn’t happy about it, according to villages-news.com.

Paul and Tim Rohan, whose brother, John, is the recreation director for The Villages, are two of the four applicants hoping to build the Sun Recreational Vehicle Development park. It would be located on about 90 acres owned by the Burke family behind their now-defunct restaurant, Burke’s BBQ, at 311 County Road 466.

The other applicants are Carl Curly and Daniel Gibbs.

The group originally approached Fruitland Park about putting the park on the parcel and then being annexed into the city. But the city expressed opposition to the idea, so the group took the proposal to Lake County, which recently sent a notice to Fruitland Park seeking comments.

The park, which would include 631 RV sites – many of them apparently would be permanent, mobile-home-type models – would be located on a portion of the land where Burke’s Tree Farm now sits. It would be directly behind the backyards of homes in The Villages located along the Sumter County line.

The park would include a 3.4-acre “Amenity Village” that would offer a clubhouse with a pool. Multiple “comfort stations” – bathhouses – are proposed to be included at various locations on the property. And the developer has proposed putting in two wastewater lift stations.