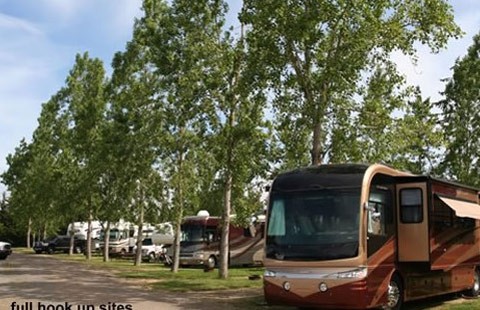 This quiet RV park in northwest Washington figured into a noise ordinance discussion after a weekend music festival.

Sheriff deputies were stuck between a rock and a loud place when a 36-hour DJ contest and rave caused a ruckus at the KOA campground east of Port Angeles, Wash., last weekend.

Clallam County Undersheriff Ron Peregrin told commissioners Monday (June 18) that the “DJ Jungle Fever” concert at the O’Brien Road campground was too small to require a festival permit and wasn’t covered by the county noise ordinance, the Peninsula Daily reported.

The all-night concert that began Friday night prompted more than 100 complaints to 9-1-1 emergency dispatchers and commissioners, and two people complained Tuesday at the county commissioners’ meeting.

Deputies maintained a presence at the site and eventually persuaded a promoter to turn down the volume, Peregrin said.

Peregrin said he knew only the first name of the promoter he spoke with.

Calls for comment from a person who had left a number last week, saying he was affiliated with the group putting on the concert, were not returned.

A request for comment from the campground owner was not immediately returned Tuesday.

“I’m convinced that KOA had no idea what they were in store for,” Peregrin said.

“On Friday, when I contacted the assistant manager, he was becoming somewhat concerned because he had seen the website for the event, and it became apparent to him that it was going to be what they call a rave, and he wasn’t prepared to deal with that.”

The noise complaints started when the thumping music began at 9 p.m. Friday. The revelry lasted until 7 a.m. Sunday.

Peregrin said there were about 50 DJs performing on two stages. Every hour, two new DJs would take the stage.

“It was essentially a DJ contest,” Peregrin said.

Campground management raised noise barriers to try to stem the nuisance to neighboring residents, some of whom showed up with guns to complain, Peregrin said.

“They dampened [the sound] a little bit, but not sufficiently enough to stop the windows from rattling 2 1/2 miles away,” Peregrin said.

“KOA attempted really hard to get them to tone it down,” Peregrin said.

No injuries were reported.

“I don’t believe that we ever had an excess of 250 people on the site,” the undersheriff added.

“They may have had some [more] coming and going, but I think 250 would be about the average,” he said.

“KOA is certified for 1,000 people, and of course the festival permit requires a minimum of 1,500 to even be required.”

Most people who complained understood that there was little deputies could do, Peregrin said.

“The county was denied the ability to deny a permit because one was not required,” he said.

Commissioners took no action on the issue this week.

“The sheriff is on a brief vacation,” said Commissioner Mike Doherty, after Jane Elvrum raised concerns about the noise at Tuesday’s meeting.

“When he’s back, we intend to reopen the topic for discussion. I suspect the board will ask that our staff contact some other similar, rural, medium-sized counties to see what ordinances they have, and possibly we’ll revisit our festival ordinance to look at the numbers, the magnitude of activities, the noise, all of that stuff.”

In 2008, commissioners held a public hearing on a proposal from Sheriff Bill Benedict for a public nuisance noise ordinance.

As it stands, the county follows a section of the Washington Administrative Code that requires an official decibel metering to ban loud noises.

“This room was packed with people vehemently opposed to any change,” Chapman said on Monday.

“It would be easy to sit here today and say, ‘Well, what we need to do is put an ordinance in place.’

“Well, that’s not easy. We tried that. We got shot down. I’m not so sure there’s ever been an ordinance proposed that had as much reaction against.”

In response to Elvrum, Doherty said: “We understand the inadequacy of the county ordinance.

“When we did bring up a change in the noise ordinance for our county,” he said, “there was overwhelming attendance at the work session and the meeting.

“Overwhelmingly, the people in that overwhelming attendance were against changing the noise ordinance and making it much tighter.

“One of the arguments, in general terms, was that we’re a rural county. People like to ride their motorcycles and do various things, and they didn’t think that should be changed.”

Peregrin said the recent concert “was simply an event that didn’t require a permit and was exempt from the noise ordinance.”

“I think even the assistant manager from KOA indicated that he intended to come in to see if he could begin working towards something that would give the county more leverage on events like that,” Peregrin said.

“He was very sincere. He was just simply duped and got into it over his head, and he couldn’t control it from that point on.”

“Once they were there, they sort of took the place over.”

Chapman said the responsibility falls on business owners to be a good neighbor.

“Better for him to make the changes on how he runs his business than for the government to come in and regulate the entire county,” Chapman said.