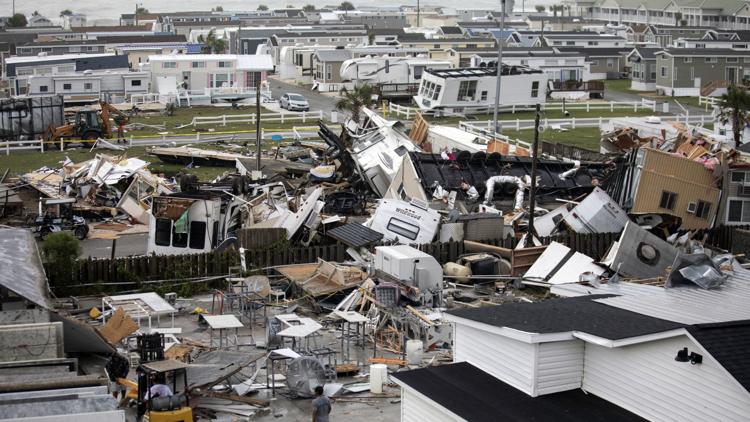 RVs are upended and debris is strewn about at the Holiday Trav-l Park Thursday (Sept. 5) in Emerald Isle
A North Carolina beach town is reporting damage from a tornado that was spun off as Hurricane Dorian approached, according to the Richmond Times-Dispatch.

Officials from Emerald Isle said in a news release on its website that the waterspout touched down around 9 a.m., Thursday (Sept. 5). More than a dozen campers were knocked on their side at the Holiday Trav-l Park, their metal skin mangled and twisted. Some were flipped upside-down, with their tires now aimed toward the sky.

A blue beach chair was left dangling, suspended in the wires that held up a power line. Other power lines were downed across a parking lot, where trash was strewn everywhere.

Other tornados spun off by Dorian’s outer bands struck other areas along the coast.

By late morning, heavy rain was falling sideways, trees were bending and traffic lights were swaying as Emerald Isle hunkered down again. The city was ground zero in 1996’s Hurricane Fran, which was the last major hurricane to make landfall in North Carolina.

Emerald Isle also weathered Hurricane Florence in 2018 and a half-dozen other hurricanes in between.