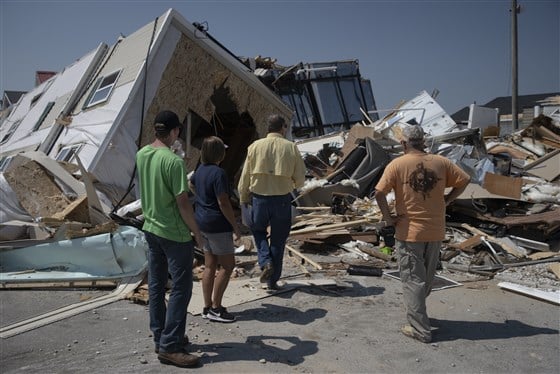 A family looks at their destroyed home Saturday (Sept. 7) with an insurance adjuster after a tornado caused by Hurricane Dorian tore through a mobile home park in Emerald Isle
Joann Davy, 83, clutched her kitchen countertop when she felt the tornado begin to lift her home, the water-borne twister flinging and shredding trailers in the mobile home park she had managed for 20 years, according to NBC News.

Her thoughts flashed to escape routes as her beachside trailer rose into the air, but Davy’s mouth also repeated a quiet prayer of “Oh my God, oh my God,” over and over again. By her fourth short, divine plea, she felt her home come back to earth.

“It’s very frightening,” she said, sitting on the stoop outside her trailer a few days after Thursday’s scare. “I called my son, and he came over and made me leave right away.”

That fear turned to sadness for many in Emerald Isle, N.C., on Bogue’s Bank, a barrier island off North Carolina’s coast. As insurance adjusters made their rounds, it would soon come time for a decision on whether to try to recover or never return.

The community had largely left ahead of warnings that Hurricane Dorian would strike their peaceful island oasis. But before the storm even began to bear down, a waterspout formed above the Atlantic Ocean on Thursday (Sept. 5) and turned these island refuges into unrecognizable sheets of twisted metal and broken glass.

“People here have lost their happy place,” Davy said. “Some folks have fallen all to pieces.”

Across the street from Davy, the once familiar line of trailers and mobile homes colorfully decorated with bright island themes had been leveled into a long stretch of debris.

Arlene Cotty, 66, sat in a chair and rested as two of her closest friends picked through the wreckage to find a few of her belongings. She almost lost this home in Hurricane Florence in 2018, but this time she wasn’t sure if she’d be able to rebuild.

“I’m upset, but it’s gone,” she said, her voice trembling. “I don’t imagine at this point that I could come back if I wanted to.”

When Gov. Roy Cooper toured the Boardwalk RV Park earlier Saturday, he emphasized the needs of those affected by the storm in North Carolina, noting that 57,000 people in the state, including those living in the park, were without power.

“People on the ground who felt the effects of Dorian are our focus today,” Cooper said in a statement. “Getting food, water and medical help to the people in need is the first priority. Utilities are working hard to restore power and we want life to return to normal as soon as possible in eastern North Carolina.”