Dorian Ravaged Park In Canada Begins To Clean Up 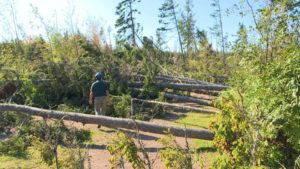 Brad Romaniuk, incident commander, says crews have not been able to get to all of the sites yet due to the number of downed trees.

The story of Cavendish Campground will have to start a new chapter after the devastation caused by post-tropical storm Dorian, according to the CBC.

He said they haven’t had a chance to assess the entire campground.

“Most places you can’t even get into to make further assessments,” Romaniuk said. “Probably 60% of it. We lost all our standing trees.”

Romaniuk said that even the trees that were left standing had substantial damage.

Cavendish Campground will remain closed for the year, which will be strictly enforced for safety reasons.