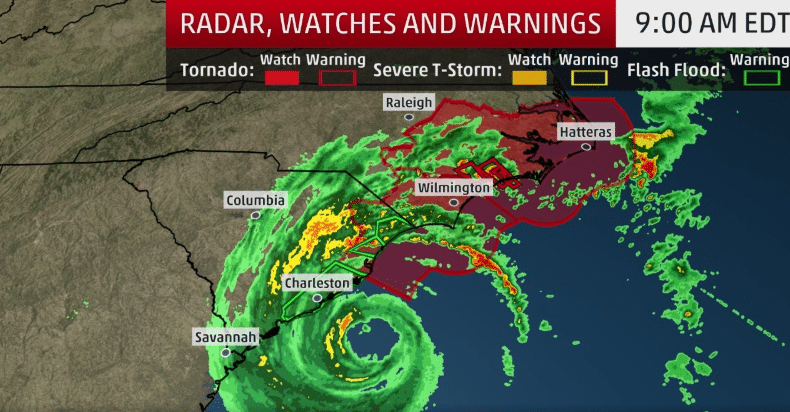 Hurricane Dorian is now unleashing its siege of storm surge flooding, rainfall flooding, high winds and tornadoes as it tracks near the coasts of South Carolina, North Carolina and southeast Virginia through Friday (Sept. 6), according to The Weather Channel.

Dorian’s maximum sustained winds increased to the 115-mph threshold required to regain Category 3 status. Despite that, its damaging impacts are likely to remain the same as it hammers this part of the southeast coast.

Tornado watches are in effect for parts of northern South Carolina and eastern North Carolina through late afternoon and early evening.

A number of damaging tornadoes have already happened Thursday morning.

The combination of rainfall flooding plus flooding from storm surge prompted the closing of 50 streets in Charleston, S.C., early Thursday morning, according to local emergency management.

Surge flooding was much lower than forecast during the Wednesday overnight high tide, due to winds still blowing offshore.

However, heavier rainbands were moving toward the South Carolina coast on the northern and western flanks of Dorian. According to the National Weather Service, three to six inches of rain had already fallen in the Charleston metro area, with more on the way.