Dynamax Super C Europa is Ride for ‘Do It Now Tour’ 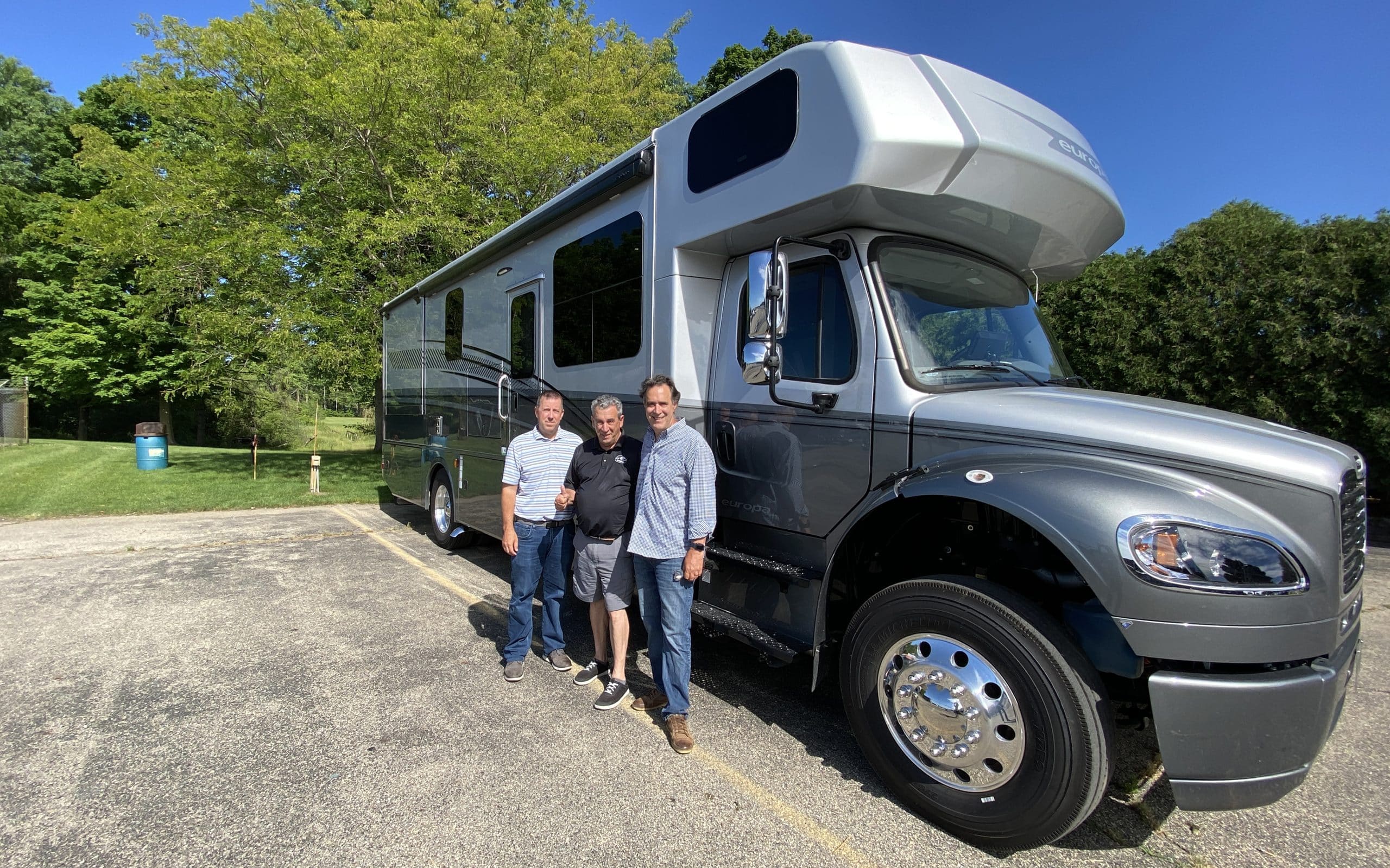 Dynamax GM Brian Clemens, left, poses with the all-new Europa 32KD Super C that “Campers Report Show” Host John DiPietro (center) will drive during the program’s “Do It Now Tour ’22.’ Also pictured is DiPietro’s brother, Mike, who was helping John pilot the Europa out east to the starting point of the tour. (Photos: Gary Gerard/RVBusiness) 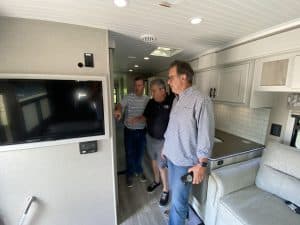 “Camper Report Show” co-host John DiPietro on Monday (June 20) unofficially kicked off the “Do It Now Tour ‘22” RV Tour from the Elkhart, Ind., headquarters of one of its main sponsors, Forest River motorized unit Dynamax.

Dynamax is providing a Super C Europa 32KD – brand new for the 2023 model year – for use during the tour.

DiPietro, accompanied by his “relief driver” brother Mike, were heading east toward the official starting point of the tour – Campers Inn RV in Merrimack, N.H. From there, John DiPietro will be joined by his wife, Maribeth and granddaughter, Mila, for a Maine-to-Florida odyssey that kicks off at 11 a.m. Thursday (June 23).

The trio will be on the road through July 22, stopping at Campers Inn RV locations along the way, visiting campgrounds and speaking with RVers who are indeed “Doing It Now.” DiPietro will document the trip in the Europa with live-streamed videos.

“We’re very excited to be here at Dynamax to pick up our Europa to begin our inaugural ‘Do It Now Tour ‘22,” DiPietro said Monday morning, following a train ride to Elkhart from Boston and an Uber ride to the luxury motorhome maker on the north side of Elkhart. “Because, basically, everybody kind of got tired of hearing the national news media saying, ‘Put off that vacation. Don’t go on that trip. Let the kids worry about it next year.’ But we wanted to ‘Do It Now.’”

He expressed gratitude to Dynamax for its generous offer of the use of the Europa.

“Our friends here from Dynamax were the ones to respond and say. ‘We want to be part of this.’ And we’re excited to be here,” DiPietro said.

Brian Clemens, Dynamax GM and Forest River Motorized Group GM, was on hand to give the DiPietro brothers an extensive walk-through tour of the new Europa, explaining all its features and systems.

“The Europa was actually the first motorhome that Dynamax ever built,” Clemens said. “We were looking to bring something back for more of an entry-level price point. But when you get to this price point, there’s really nothing entry-level about it. When we brought back the nameplate, we really were trying to meet a demand for a shorter Super C. People wanted something in that 33-, 34-foot range.”

The coach the DiPietros will pilot is the second floorplan for the new Europa, a mid-entry coach that includes a fixed bed instead of a folder and a camp-side dinette with a large window. The 32KD rides on a Freightliner M2-106B chassis (33,000 lbs. GVWR/46,000 lbs. GCWR) with a Cummins B 6.7L I6 turbo diesel engine (360hp/800 ft.-lbs. of torque) and an Allison 3200 TRV six-speed automatic transmission.

This particular unit is a prototype that Clemens and his family used for seven nights, putting 1,000 miles on the odometer.

Clemens said Dynamax likes to do full real-world testing of prototypes to determine if there are any shortcomings before the unit goes into full production.

“Full disclosure, I actually had very few issues,” Clemens said. “There were a couple of sliding doors that were dragging just a little bit. I adjusted both of those. And there was a towel bar near the range that was bothering me, so I just took it off. And that was about it. As for everything else, I was really pleased with the floorplan and how everything was laid out. … It performed beautifully.”

DiPietro explained the impetus for the Do It Now Tour.

“We’re hearing so much negative talk about gas prices,” he said. “But the only time we really have is now. Who knows what the gas is going to be next year? And who knows, if you get to a certain age, what your health is going to be like.”

He said the first six days of the tour are locked in as far as destinations, but after that, the trip will be largely a seat-of-the-pants affair.