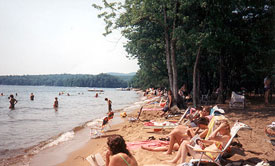 The beach at Sebago Lake State Park in Maine.

Sebago Lake State Park Campground – Maine’s most popular and largest state campground – will open today (April 13) for the season and Patriot’s Day Weekend, April 14-16, according to a Maine Department of Conservation press release.

The campground opening is about four weeks earlier than usual, according to officials with the Maine Bureau of Parks and Lands, under the Maine Department of Conservation, the Bangor Daily News reported.

“Conditions are such that we have been able to turn on the campground water and get the bathrooms ready earlier than normal,” Ron Hunt, BPL regional manager, said Thursday. “We are looking forward to a full and busy season.”

With 125 sites, including RV hook-ups, the Witch Cove section of the campground will be opened, Hunt said. Off-season camping fees will be in effect and posted at the entrance station, he said.

Campground sites will be available on a first-come, first-served basis, Hunt said. No site reservations will be valid until May 21.

Campers are likely not to find reception staff at the campground booth, the regional manager said, adding that campers will have to confirm their own site use. Campers will calculate their own fees and then put the fee amount in the metal receptacle known as the “Iron Ranger,” Hunt said.

Park staff will be monitoring the campsites, Hunt said. A ranger and assistant ranger will confirm site use on a daily basis, he said.

The popular park has a new manager, Matt McGuire, who now is on duty along with other staff, Hunt said. McGuire is an experienced park manager who managed previously at Cobscook Bay and Rangeley Lake state parks.

For more information about Sebago Lake State Park, call the park at: (207) 693-6231. Callers can leave a voice message which will be answered.