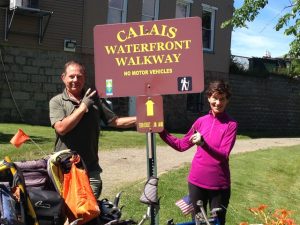 RVers who love to hike, bike or ride on horseback can park their house on wheels at the campground and explore America along a non-motorized route that stretches from the Canadian border in Maine to Key West, Fla. From the moose to the manatee, the East Coast Greenway (ECG) will contain 3,000 miles of trails when finished, and it is already serving as a business booster for some of the campgrounds located along the path.

Called the Urban sister to the Appalachian Trail, the ECG is the most ambitious urban trail project in history with 900 miles already complete. Roughly 50 million people live within the ECG’s home counties. For them, the greenway is a convenient and safe place to walk, jog, bicycle, ride horses, skate or ski.

For tourists, camping along the ECG can be the perfect way to connect to the nature and culture along the Eastern Seaboard, according to ECG Alliance Executive Director Dennis Markatos-Soriano.

“Camping provides a great way to experience all the greenway has to offer — from quaint small towns to bigger cities and the surrounding nature in between,” he said. “Many of our members have enjoyed experiencing the greenway by taking their RV or tent with bikes in tow to top greenway sections and skipping the less completed parts. It provides a great way to see dozens of highlights available to the public.”

The ECG Alliance has plans to partner with campgrounds located near the greenway. “Our goal is to ensure they have all the details they need to serve joint visitors who want days full of adventure throughout the East Coast and nice places to get some rest and cook out in between,” he said.

Cottonwood Camping and RV Park that opened last summer near Route 1 in Columbia, Maine, has a trail that connects to the ECG, which is about 4,000 feet away. Owner Shirley Cottonwood said she specifically built the trail from her campground to the greenway and her park offers guided horse tours. “Our campground visitors are definitely exploring the ECG.”

“The word is getting out, yet many people still don’t know about it,” said Markatos-Soriano. “We want to get the word out much more and grow to 100 million visits per year.”

Conceived in 1991, the ECG is a diverse mix of paths through the countryside and cities, waterfront walkways, park paths, old railroad corridors, canal towpaths and pathways along the highway. Most segments are paved, but some are stone dust or other surfaces.

More than 100 trails are designated as East Coast Greenway. The longest continuous stretch is 80 miles in Maine, and the most developed metro-area section is located in Raleigh-Durham, N.C., including a portion of the American Tobacco Trail.

Wayfinding tools like ECG signage, maps and guides help tourists navigate the route. Greenway markers are posted on more than 1,000 miles in both directions and plans are to fully sign all 3,000 miles by 2020.

“It is our vision to have 3,000 miles of completed greenway safe and accessible for everyone from babies to grandparents,” said Markatos-Soriano. “We want everyone relaxed and enjoying the nature around them.”

“We’re part of the solution to healthier living and a healthier environment,” added Bob Spiegelman, ECG Alliance board chairman. “The Greenway goes through 450 communities in 15 states and D.C. This is not just a project for long-distance travel, but a project that benefits the everyday life of people.”

An avid bicyclist, Spiegelman has biked the entire greenway once and is almost finished cycling it a second time. Fellow cyclist Myron Skott of Georgia has also biked it twice. His wife, Cathy, joined him for the adventure one of those rides. Although Spiegelman and Cathy Skott both joked that they don’t camp, Myron Skott does.

“Camping fits in so well with biking the greenway,” he said. “That first trip I camped four or five times along the way.”

Google even directs people to the greenway, although Google doesn’t call it the ECG yet.

“It isn’t like Lewis and Clark,” Cathy Skott said. “The route is well mapped out for you.”

“The ECG is different because you really get to interact with the people in this country,” Cathy said. “It connects all of these small towns you might never visit and you meet new people. People that don’t know about the ECG are in awe once we tell them about it. It is really a jewel.”

The ECG is celebrating 25 years and will be hosting its biggest event ever, a River Relay, in the fall of 2017. “We’d like to have 10,000 people join us to bike, walk or run different sections of the East Coast Greenway,” Markatos-Soriano said. He invites campgrounds to join in the fun in celebration of rivers along the East Coast. Stay tuned for more details at www.greenway.org.

ECG Kiosks are located in the following locations.