Editorial: If Fire Is Banned, Why Not Camping? 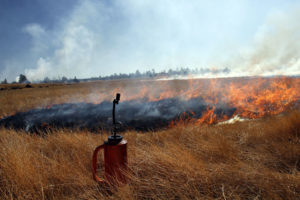 For the record, Friday’s (April 20) ban on dispersed campfires and smoking in the forests around Flagstaff, Ariz., is not the earliest that fire restrictions have been implemented.

So April 27, although early, is actually part of a recent pattern of dry autumns and winters that have made for dangerously dry springs. The U.S. Forest Service deserves credit for ramping up the regulations and staffing up for fire watching, firefighting and enforcement, along with the city of Flagstaff and Coconino County, too.

What’s different this year is the exceptionally dry fall and winter, during which just five inches of precipitation fell after Oct. 1. Snow disappeared nearly as soon as it fell, leaving the grasses standing and drying out fast – the fast-moving fire in Winona earlier this month starting by illegal burning should be a lesson to us all. Fires are part of the life cycle of prairies and forests – the trick is to not encourage them on windy days with risky behavior.

That’s why in past years we’ve suggested designating the forests around Flagstaff off-limits to camping from the start. No campers, no illegal fires – there are usually enough beds in local shelters and churches to house all the transients who need one.

Some have said that not being allowed to camp out at all within greater Flagstaff absent a dire emergency is cruel and unusual punishment for the homeless and recreationists alike. We have to disagree and say that there are simply higher priorities — such as keeping the forests and nearby neighborhoods safe. If you are from elsewhere and disappointed, we’d ask you to put yourself in the shoes of the locals. As the forest goes, so goes Flagstaff, and when the fire danger reaches “High” and the Red Flags go up, why take the risk when the rainy summer will be here soon enough?

If campers, especially transients, insist on illegal campfires, we’d suggest two strategies by the Forest Service: designate some dispersed campfire zones along forest roads, but with careful monitoring. And for the transients, a primitive site on Forest Service land with fire pits would be better than dozens of campsites just outside the Flagstaff city limits.

Instead of a campground fee, transients might help with cleanup, maintenance and basic woods work. If their aim is to sleep out under the stars rather than a ceiling, let’s enable them do it in a way that is safe for all of us who appreciate and share the forest with them.