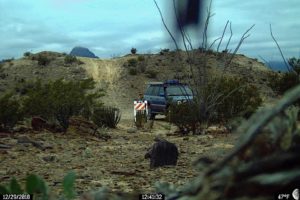 A vehicle evaded a closure barrier at Big Bend National Park on Dec 29.

Editor’s Note: This editorial was written by Kusrt Repanshek for the National Parks Traveler.

Temptation can be a powerful motivator and for some Big Bend National Park visitors it cost them three drones that were confiscated after they drove around a barrier to keep visitors out of a section of the park closed during the government shutdown.

In Joshua Tree National Park, officials said illegal off-road driving caused unspecified damage to the park’s natural resources. As each day passes, more and more parks are being overwhelmed by human waste and garbage and other problems caused by maintenance crews being furloughed.

Weather also was complicating things. Some parks closed roads because they were snow-covered, at Sequoia National Park in California a portion of the Generals Highway was closed due to traffic accidents and icy conditions.

At Big Bend, hidden cameras and sensors caught five four-wheel drive vehicles that went around barriers to head into an area that had been closed. Law enforcement rangers were able to track them down. While no citations were immediately issued, the drones one group had were confiscated and an investigation is ongoing to determine whether any serious resource damage was done by the group. If there was, citations and fines could eventually be issued.

While Interior Department officials might have thought it noble to keep the parks open with very, very limited Park Service resources, the behavior of some, the risks others are exposed to and the diminished visitor experience just don’t make it worth it.

A short list of parks that have closed some facilities and campgrounds due to human waste and garbage that can’t be hauled away because maintenance crews have been furloughed includes Shenandoah, Yosemite, Big Bend, and Joshua Tree. Other parks are closing access because of snowfall that won’t be plowed away until the shutdown ends.

At Yosemite National Park, where campgrounds and the Mariposa Grove of Giant Sequoias have been closed, staff urged visitors to delay their trips to the park until after the holidays pass. A cartoon making the rounds on social media suggests pit stops before visitors pass into parks. That message was being parroted by Sequoia and Kings Canyon staff.

“Restrooms are available in communities outside Sequoia and Kings Canyon, and limited restrooms in deteriorating conditions inside the parks,” the staff tweeted Monday (Dec. 31) afternoon. “Please use bear-proof trash cans or pack your trash out. Please do not add trash to a full trash can or dumpster.”