By: Woodall's Campground Magazine|Published on: May 31, 2011|Categories: Industry News| 0 comments 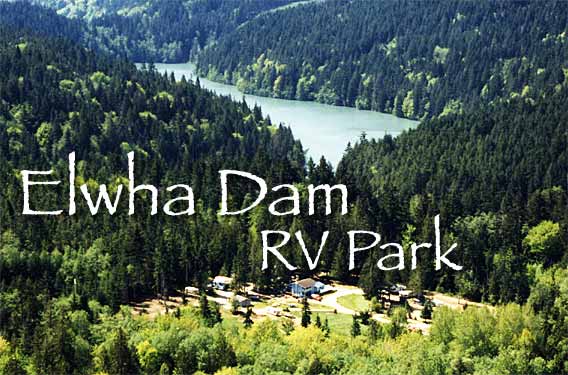 The Elwha Dam RV Park in Washington state is keeping its signature name — even though in three years, the Elwha Dam will be no more, the Peninsula Daily reported.

Bobbi Fuller, owner of the recreational vehicle park that is right across the road from the entrance to the staging area for the dam demolition, is basking in the attention the project is receiving and can’t wait for the tear-down to begin Sept. 17.

“It will be the site of the old dam, so it will still be the best RV park by a dam site,” Fuller quipped.

A major step occurs in the removal of the Elwha Dam and its sister edifice, the Glines Canyon Dam, at 8 a.m. Wednesday (June 1)when the dams stop providing electricity to the Bonneville Power Administration — in effect, eliminating their reason for being.

The intention of the $327 million Elwha River Restoration Project is to unblock the river to bring back the waterway’s storied salmon run.

Recent guests have hailed from the Netherlands, Quebec, Germany and France.

An overlook is planned near Lower Dam Road so visitors can watch the 11-story dam being dismantled.

The RV park also is located directly across the road from acreage which tear-down contractor Barnard Construction expects to lease from Clallam County for a staging area for heavy equipment and other vehicles, county Engineer Ross Tyler said last year.

All that activity doesn’t have Fuller worried in the least about losing business. 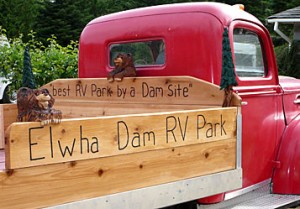 She has quite the opposite expectations.

“The Elwha Dam is getting worldwide interest,” Fuller said.

“People are coming to stay in the RV park to visit the dam before it’s taken down.

“It will be like the restoration of Mount St. Helens, and how the whole world watched its restoration. It will be the same thing with the Elwha Valley,” she said.

Fuller was born in Seattle and raised in Shelton.

“I grew up thinking the Olympic Mountains were in my backyard,” she said.

She manages the RV park with her mother, Gladys Kemp, 90.

A former administrative assistant for the state of Alaska, Fuller was 58 and living in Wasilla, Alaska, when her mom called her with an idea.

Fuller’s mother “said it was time to grow up, and I needed to come home and live with her,” Fuller recalled.

So she and her late husband looked for a semi-retirement business “and found this lovely park,” she said.

“We consider the particular piece of ground to have some sort of magical essence,” Fuller said.

And it’s only going to get better when all the commotion starts from dismantling the dam, Kemp said, leaning forward on her elbows in the RV park office, smiling broadly.

“This is the most wonderful thing that’s ever happened to this park,” Kemp said.

It’s had a string of good fortune of late.