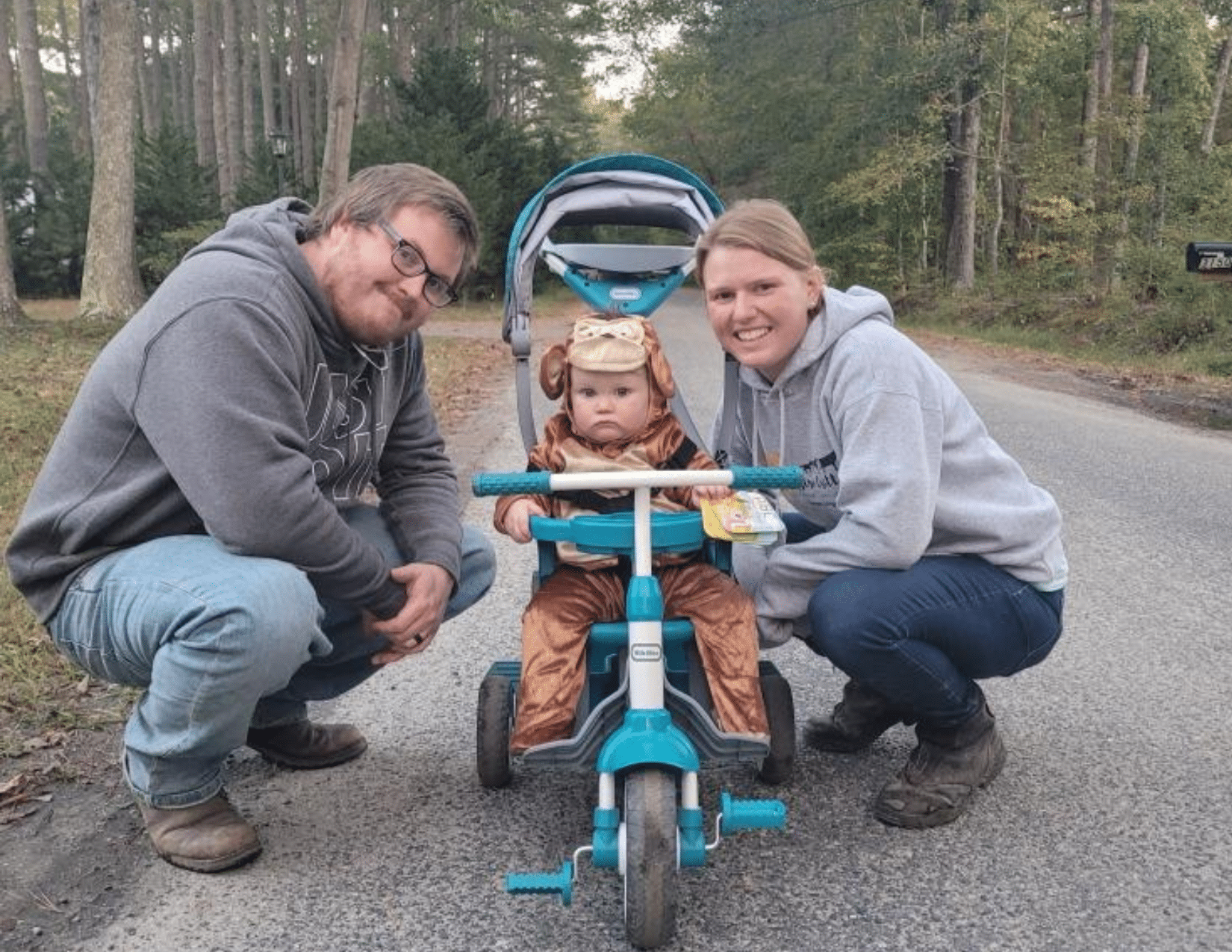 Emily Peck with her husband, Brandon, and son, Jasper.

Jeff Sims grew up working at Compton Ridge Campground, his family’s campground in Branson, Mo., and gained so much experience that he was elected president of the Missouri Campground Owners Association at the tender age of 19.

Ten years later, the association hired Sims as its executive director, and Sims proceeded to take on many other roles in industry, eventually becoming senior director of state relations and program advocacy for the National Association of RV Parks and Campgrounds (ARVC).

Emily Peck could be on a similar trajectory.

She’s been living and working at the Yogi Bear’s Jellystone Park Camp-Resort location in Gloucester Point, Va., ever since her parents purchased the campground in 2005, when she was 11 years old.

“I did a little bit of everything,” she said.

After initially helping with cleaning and trash pickup, Peck later worked in the camp store before taking over management of the park’s recreation program by the time she was 18. An animal lover and professionally trained horseback rider, Peck subsequently launched a nonprofit animal sanctuary with her family, rescuing miniature horses, horses, pigs, donkeys, goats, sheep, and any other farm animal in need of a safe, forever home. Her campground duties include marketing, overseeing the park’s recreation program and supervising all animal related activities.

A year later, at the tender age of 22, the Virginia Campground Association (VCA) hired her as its executive director, earning Peck the distinction of being the youngest state association executive in the campground business.

Peck remembers attending the VCA convention in 2016 with her husband, Brandon. “They were looking for a new director. We thought, ‘That sounds fun,’” Peck said with a laugh, adding that she felt she could take on the part time management role while continuing to work with Brandon at her family’s Jellystone Park.

VCA was struggling without an executive director at the time Peck was hired. David Gorin led VCA from 2002 to 2011, an assignment he took on during his final years as CEO of ARVC. VCA hired one other executive director after Gorin, but he didn’t last.

VCA President, Ray Barker, remembers how difficult it was to recruit an executive director with campground industry experience in 2016, when the associated decided to hire Peck. “Most applicants were people who had no experience with RVs or knew anything about camping or the camping industry,” said Barker, who co-owns and operates Tall Pines Harbor Campground in Temperanceville, Va.

But some VCA board members wondered if Peck was too young to take over management of the association. Some also worried about potential conflicts of interest, since her father also served on the VCA Board of Directors.

“But I knew Emily and I knew her family. I had been to their campground many times,” Barker said.

VCA also needed someone with fresh perspectives to help the association on a number of fronts, including adopting new technology. Peck also had a lot of youthful energy and enthusiasm, which the association needed.

“She was definitely up for the challenge,” Barker said, adding that since her hiring four years ago, Peck has proven her value to VCA.

Indeed, since she was hired, Peck has done a lot of work to revitalize VCA, revamping the association’s website and securing the state of Virginia’s approval to use their “Virginia is for camping lovers” motto on t-shirts, tourist cups and hats, which the association sells through its website. Peck has also established reciprocal links with Virginia’s tourism website for 2021, which will significantly increase visitation to VirginiaCampgrouds.com.

Peck has launched a Facebook page for Virginia Campgrounds and changed the association’s campground directory from a brochure to a magazine-style camping guide — although she had to produce a digital guide for 2021 because of the COVID-19 pandemic.

“All of the visitors centers were closed, and state parks weren’t handing them out. COVID shut down our normal distribution points for the directory,” she said.

However, there will be some unique benefits with the digital director. For starters, there will be spring, summer and fall versions of the directory, and new parks can be added to each new edition, so parks don’t have to wait a year to be included if they miss the initial deadline. New events can also be highlighted in each version of the directory.

Peck has obtained a marketing grant from Virginia Tourism, which will help VCA market the digital directory. “We will have banner ads on Virginia Tourism as well as Google ads to name a few,” she said. The marketing initiative will cost $20,000, but half of it will be reimbursed to VCA by the state.

Peck has also been working to increase VCA’s presence at RV shows. Before the pandemic, she was also representing VCA at six to nine RV shows each year.

Peck also had VCA join the Virginia Restaurant, Lodging, and Travel Association in 2020, which significantly increased VCA’s capabilities on the government relations front. “Their lobbying team is amazing,” she said. “They helped us with COVID and helped us get in touch with the Governor’s Office.”

Peck also joined the Virginia Restaurant, Lodging, and Travel Association’s Government Affairs Committee, which helps expand her network of contacts while also providing her with information on topics of interest to VCA members.

Peck has also worked more than full-time during the pandemic because of all of the government affairs issues that had to be confronted so that parks could open.

“She has worked really hard,” Barker said. “There were nights we would be texting and having phone calls at 11 p.m. at night (to deal with the pandemic). Association members don’t always see how much correspondence goes on behind the scenes.”

Peck said the initial months of the pandemic were hardest on Virginia campgrounds. “We were never shut down,” she said. “But we were told we could not have people stay for less than 14 days. That killed our spring business.”

But by working with the Virginia Restaurant, Lodging, and Travel Association, as well as Jeff Sims and David Basler of ARVC, VCA got the 14-day restriction removed before Memorial Day, and it got swimming pools opened with restrictions by the Fourth of July.

“Our industry has been doing well,” Peck said. “We made up a lot of revenue we lost in the spring. But not everyone made up everything. Virginia is kind of medium ground on the COVID front. We’re not like Florida or Arizona, but not as strict as some states, either.”

Peck is also hoping to organize VCA’s next conference in the fall of 2021 at the Wilderness Presidential Resort in Spotsylvania, Va., the same venue that was scheduled to host the 2020 meeting last spring that was cancelled due to COVID.

In the spring of 2019, VCA had their meeting at the Chesapeake Bay Kampgrounds of America (KOA) which drew about “23 to 25” campgrounds and about the same number of vendors. The most attendance the association has seen in many years.

Since she took over management of VCA four years ago, Peck has managed to increase the association’s membership base from “between 55 and 60 to 71 members.”

Barker and others are confident Peck will continue to strengthen VCA and improve its services. So much, in fact, that the VCA board recently renewed Peck’s contract for another year.

Jeff Sims of ARVC, for his part, said he has been impressed with what Peck can do. “She is smart enough to ask the right questions and be a consensus builder,” Sims said, adding, “Sometimes an association needs the young blood to breath some new life into it.”