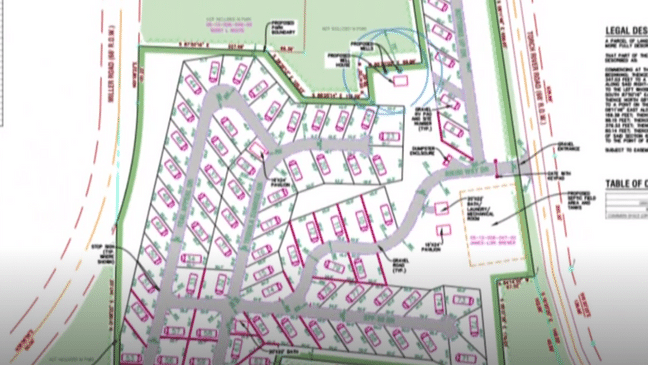 The proposed RV park would include around 80 campsites off of Torch River Road. (Payton May/UpNorthLive News)

Traffic, environmental impact and an eyesore.

According to UpNorthLive.com, Those are some of the concerns voiced in a crowded room over the proposal to bring a new RV Park to Rapid City, Minn.

Around 100 people came out to the meeting on Tuesday (Sept. 15) to voice their opinions on the proposed park off of Torch River Road.

Many concerned about the 80 campsites allowed on the grounds and the traffic that could cause.

“I think it’s an excessive amount of RVs in that location,” said Milton Township Resident John Spevacek. “I believe it will create a significant amount of additional traffic in a location that already has huge traffic during the summer months.”

Others have environmental concerns.

“This is about the environment. This is a development project that is right on Torch that is really going to have an impact on a lot of the homes in the area,” said Attorney Michael Naughton. “Some of the things I hope the planning commission considers is the viability of this plan if it was properly done if it really is taking into account what happens to the land. Also sewage and water treatment.”

“This will be probably the largest septic system in Milton township they’re proposing. It’s adjacent to wetlands and it’s close to some people who have shallow wells,” said Spevacek. “So we have no guarantee that this will not pollute the groundwater in those people’s wells and get into the Torch River.”

Due to erosion, there is currently work going on at the possible park location.

“Right now, the work going on there is soil erosion and unfortunately due to the rain that we have, they have had major problems in mandated restoration,” said Zoning and Millage Administrator for Milton Township Chris Weinzapfel. “So they’re still working on the property as it is.”

If the development plan gets approved?

“The next step is we issue under the planning commission a special approval and they can basically proceed with pulling permits from certain buildings that they have out there,” said Weinzapfel.