EPA Tells Utah Resort to Undo the Damage it Caused 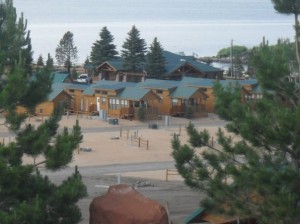 Federal regulators have ordered owners of the Panguitch Lake Adventure Resort in southern Utah to undo the environmental damage the lake allegedly suffered during the construction of an RV park and marina three years ago, the Salt Lake Tribune reported.

“Unauthorized construction at the Panguitch Lake Adventure Resort degraded more than seven acres of the lake and nearby wetlands,” said Mike Gaydosh, director of enforcement in EPA’s Denver office. “Those taking actions that impact surface waters and wetlands must secure appropriate permits to protect water resources and the functions they provide.”

The Polidori Corp.’s Veronica Polidori left a voicemail message saying the decision is the result of “some confusion.”

“It’s still an ongoing issue that will take us awhile,” she said “but we are working diligently on it.”

The EPA has given the company 14 days to say whether it plans to comply with the order with a plan to restore or mitigate the damage, said Wendy Silver, an agency attorney.

The EPA alleges dredge or fill material disrupted about 7 1/2 acres of Panguitch Lake and adjacent wetlands. The unauthorized work during 2007 and 2008 included construction of a cofferdam, dredging and filling a large portion of an existing marina, and the addition of large rocks around the edge of the new marina.

At the RV park, a rock wall was constructed, large amounts of earthen fill were discharged and large rocks were placed along a portion of the lake’s southern shoreline.

The EPA said Panguitch Lake and its wetlands are a resource, providing aquatic and wildlife habitat, groundwater recharge, flood protection, recreation and aesthetics.

Backfilling these areas can have an adverse impact on wildlife habitat and on communities of fish, plants and insects, the agency said.

According to the resort’s website, the Panguitch Lake Resort is located on the southern shores of Panguitch Lake in the scenic Rockies of Southern Utah. The Elevation is 8,217 feet and the resort is located between Highways 89 and I-15. Located 30 miles from Cedar City, 44 miles from Bryce Canyon on Hwy. 143, and 18 miles from the town of Panguitch, Utah. Sportsmen rate the lake one of the top 10 trout fishing lakes in the U.S.