By: Woodall's Campground Management|Published on: May 25, 2018|Categories: Industry News| 0 comments 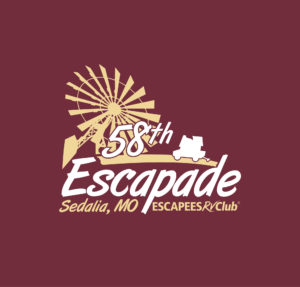 At the same time the group is marking its highest ever membership total at almost 62,000 families, the Escapees RV Club is set to welcome nearly 640 rigs and their owners to the 58th Annual Escapade, which runs from May 27 to June 1 at the Missouri State Fairgrounds in Sedalia, Mo.

In addition to more than 80 educational seminars, classes, and workshops as well as activities, entertainment and camaraderie, the Escapade will also celebrate the 40th anniversary of the club founded in 1978 by Joe and Kay Peterson, and now headed up by their grandson, Travis Carr, and his wife, Melanie.

Travis Carr, who succeeded his mother, Cathie Carr, as president of the Escapees at the 56th Escapade, said the club only recently passed its previous membership high set prior to the Great Recession and is now breaking new ground.

“There’s been a lot of growth just over the past couple years,” he said. “We’re just seeing more people participating in our activities and our educational programs, and all of our events are just full right now. Our RV Boot Camps are going well. So it’s just a lot of people are participating in the offerings that we have, and getting involved in the Escapees community.”

As for the Escapade itself, Melanie Carr, who serves as the Escapees vice president, said excitement is especially high because it will double as a celebration for the club’s 40th anniversary.

“We’re going to be celebrating all week, and we have promotional items going out, but on the last day of the event we’re doing a big street festival where we’ve got some wine and beer vendors coming out, and food trucks, too,” she said. “Plus, we have activities for the kids, which we have about, I think a little over 40 kids registered currently to come to the event so we’re seeing that number grow too. We have all that going on, and then that night we’ve got a big fireworks display to celebrate. So it’s going to be pretty awesome to be there and celebrating that with everybody.”

“It’s going to be a fun event and that was really the goal for this year’s Escapade – just making it fun,” Travis Carr added. “Getting people together and celebrating the past and future. You know sharing good times and good stories and celebrating them, and then carrying the torch forward. So it’s going to be a fun, and that’s really what we’re looking forward to. Just getting there and reconnecting with old friends and making new ones.”

The Escapade unofficially began Thursday (May 24) with the RV Boot Camp, a sold-out three-day seminar designed to introduce novices to the RV lifestyle as well as serve as a refresher for veteran RVers. Also running prior to the Escapade is Camp Reboot, a two-day “Smartphone Photography & Google Photos” class offered in partnership with Jim and Chris Guld of “Geeks on Tour.”

Other Escapade seminars include topics such as RV technology, LED lighting, auxiliary braking, insurance, and dozens of other RV-related maintenance and lifestyle subjects. Also, attendees will have opportunities to browse the Escapade market featuring nearly 50 vendors, as well as visit the many Escapees chapters represented at the event as they socialize, enjoy live entertainment, door prizes and have fun throughout the week. Additionally, the Escapade is offering a children’s program known as Kidscapade in partnership with the Fulltime Families lifestyle group.

Travis Carr noted there are almost 100 Xscapers — an RV lifestyle group of the Escapees designed for nomadic RVers working full-time on the road — who will also be attending the Escapade.

“It’s definitely the largest number we’ve ever had of Xscapers attending the Escapade,” he said. “Seeing the number of Xscapers who are going and getting involved is something we’re really excited about. It’s one thing to see Xscapers growing within their own community, but to also see them participating in Escapee events is terrific.”