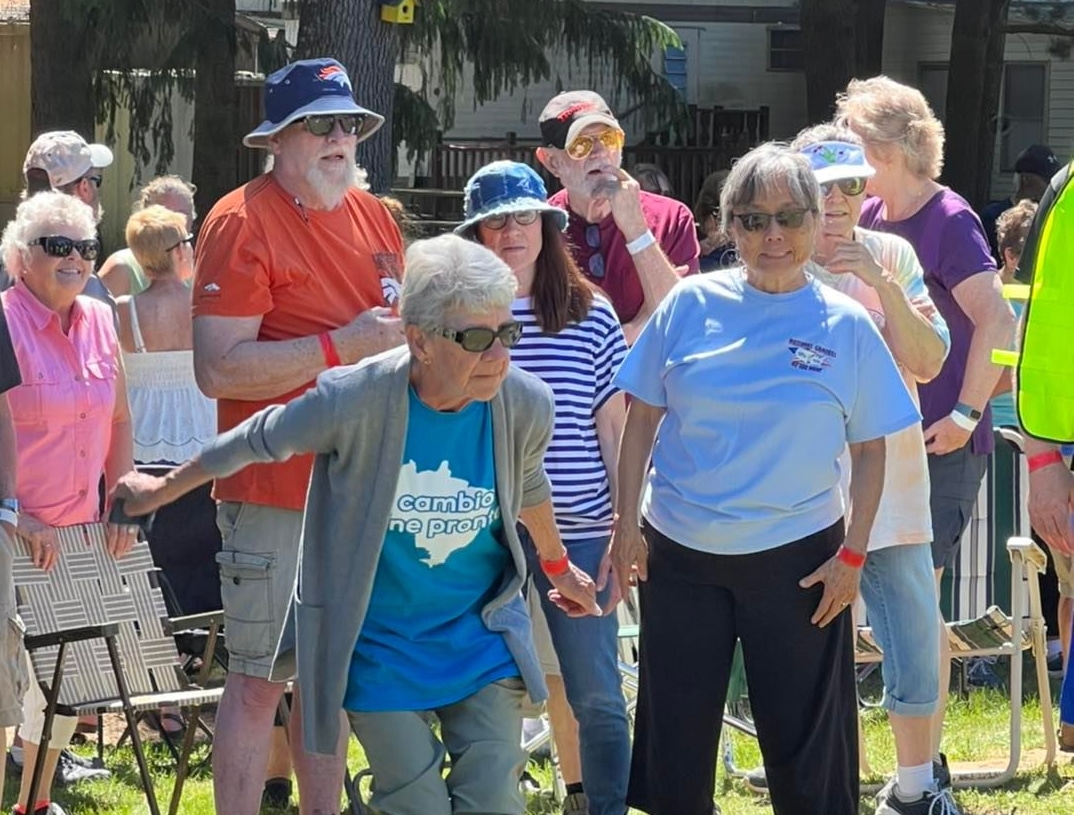 Evergreen Campsites & Resort in Wild Rose, Wis., has been hosting the Wisconsin Deaf Association every Labor Day weekend for the past seven years.

But this year, the 480-site Wild Rose, Wis. campground had the honor of also hosting deaf camping enthusiasts from 25 states across the country from June 12-19.

Evergreen Campsites provided the campground facilities and served breakfast, lunch or dinner several times throughout the seven-day event, which involved 300 families with deaf men, women and children of all ages. The National Campers of the Deaf (NDC) organized activities designed for deaf campers, said Jim Button, whose family has owned and operated Evergreen Campsites since 1981.

“One activity was not scheduled,” Button said. “(Preparation for) an actual severe weather warning! We ended up providing a crash course on emergency communication.”

Suddenly, Button was faced with the challenge of figuring out how to evacuate 300 guests into the park’s three storm shelters. It was a challenge that not only tested Button’s emergency response plans but one that underscored the importance of campgrounds having storm shelters on site.

Like many Midwestern states, Wisconsin is tornado country, and Evergreen Campsites has suffered its share of tornado damage over the years. “In 1988, this park was ripped apart by a tornado,” Button recalled. “We had another one in 1993, another one five years ago, almost to the day, not to mention wind shears.”

When Button heard tornado warnings on June 15, he called his local Emergency Response Center to confirm the risks, and then contacted leaders of the NDC to alert them to the location of Evergreen Campsites’ three storm shelters, just in case a storm approached and they needed to take cover.

Button assigned campers in different sections of the campground to go to specific storm shelters to avoid confusion and overcrowding and he informed section leaders of the best routes to take to get to each shelter. He confirmed this information to the NDC leaders about an hour before an actual tornado touched down in the county.

By 4:30 p.m. on June 15, Button said, the wind picked up and the sky turned a murky color, a color he recognized from previous tornados. That’s when he reached out to NDC leaders and all other park guests, giving them instructions to immediately escort their group into their assigned storm shelters, where they were assisted by Evergreen Campsites staff members.

Members of the NDC spent about 30 minutes inside Evergreen’s storm shelters, during which time the storm passed.  As a result of heavy rain and 90-plus mile per hour winds, five vehicles and 12 campers were damaged and about 50 pine and oak trees that were 70 to 80 feet tall fell throughout the resort.

“We didn’t have one injury,” Button said. “Everyone got to a shelter in time.”

“This should be something we teach (park operators),” he said. “In rural areas with limited resources, how do you get the word out to our guests that a tornado is coming or that severe weather is approaching? ”

Button was able to direct his campers into his storm shelters because he already had emergency plans in place and he had NDC team members on site who could assist with communicating the need for an emergency evacuation. “It was a challenge to get all of the guests into the shelters,” he said. “We had lots of elderly guests, so we are also now thinking, ‘What if (descending) steps (into a storm shelter is) not an option?’ ”

Evergreen Campsites was honored for its work with the National Campers of the Deaf (NDC). On the left, Jim Button, owner of Evergreen Campsites, and Hannah Piper, operations manager for the park, accept the honor from NDC officials.

Moreover, what if Button had guests with special needs in the resort and didn’t have people on site who could communicate with them? What then? How should park operators prepare for emergencies involving those with unique communication needs?

Button’s latest tornado experience also underscored the importance of park operators having storm shelters. “We have them because of the tornados and severe thunderstorms in our area,” he said. But parks in other areas of the country have fires, floods and hurricanes. Where should their guests take shelter? Do parks need to build more emergency shelters?

“Most of the time, storm shelters sit unoccupied. But when you need them, you are glad they are there,” Button said.

Button said it was an honor for his park to host the NDC for its annual campout.

“They’re a great group of campers,” he said, adding, “They want to do what everybody else does. Over the last seven years, we’ve been able to adapt many of our processes to be able to host them properly.”

The NDC provided a variety of activities for their group, including cornhole tournaments, a bean bag toss and canvas painting. They also had a photo booth and brought in a magician who specializes in performing for deaf people.

Button’s parents, Margaret and Bill Senecal, acquired Evergreen Campsites in 1981. Jim Button has been running the park with his wife, Dawn, since 1996, and hopes their children will eventually take over the business as third-generation owners and operators.

“The team that runs the resort is first in class,” Button said. “If it wasn’t for all the great employees and their dedication to outdoor hospitality, it certainly could have been a different outcome.”