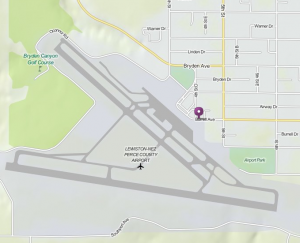 This map shows the proximity of the Bryden Canyon Golf Course (shown in green at left) to the Lewiston-Nez Perce County Regional Airport in Lewiston, Idaho. Map courtesy of MapQuest.

A recreational vehicle park isn’t a compatible use on or near airport property, a Federal Aviation Administration (FAA) official said in e-mails to officials associated with the Lewiston-Nez Perce County Regional Airport in Lewiston, Idaho.

According to the Lewiston Tribune, from a cursory review of a proposal to put an RV park on airport land leased for the Bryden Canyon Golf Course, “it appears that the FAA would not be in favor of allowing the development,” Jason Ritchie of the FAA office at Renton, Wash., wrote. “There are several potential problems as we see it.”

The FAA was asked to do a preliminary review of the proposal after Lynn C. Moss, retired director of the Lewiston Parks and Recreation Department, started making the rounds of the city of Lewiston, Nez Perce County and airport authority seeking support for a $500,000 state grant. The goal was a park for about 40 upscale RVs on land that receives minimal use by the golf course.

Members of the airport authority board, the agency that manages the airport, told Moss and Tim Barker, the present Parks and Recreation Department director, at a meeting last month there was no reason to expend too much effort if the FAA wasn’t supportive.

Neither Moss nor Barker could be reached Thursday.

Airport Manager Robin L. Turner said he expects the airport authority won’t do anything further given the FAA response.

“The FAA obviously is not going to approve that kind of operation, so it just kind of becomes a moot point,” he said.

If the city wants to attempt a proposal that meets the FAA’s concerns, that would be up to its representatives, he said.

Turner said he isn’t aware of any other space on the airport, including the golf course, that might be suitable for an RV park.

Ritchie said in his e-mail that an RV park, campgrounds and secondary residences are classified as residential by the FAA, and the federal agency expects grant recipients like the airport authority “to oppose zoning laws that would permit residential development near airports.”

“The FAA currently does not approve of any new roads within the RPZ,” Ritchie wrote.

Adding a use such as the RV park also would require a new lease with the airport, Ritchie said, and that lease would have to be at fair market value for the commercial use.

Dennis A. Corsi of Armstrong Consultants, a firm retained by the airport authority for engineering and planning services, also provided cautions about noise zones and an encumbrance on the golf course created by the use of Idaho Land and Water Conservation Fund grant money.

The RV park would require approval from the National Park Service for a change in use, Corsi wrote in a two-page assessment of the project.

Relocation of O’Connor Road is on the airport’s long-term radar because its location doesn’t meet current FAA regulations. Turner said he believes Ritchie was saying in essence that allowing more development that relies on O’Connor Road as it is now aligned would increase costs when it needs to be moved or reconfigured.