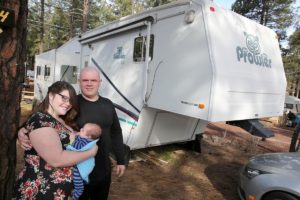 Craig Collins stands with his girlfriend, Sara Douglas and their 2-month-old son David Collins outside the fifth wheel trailer they call home in the Kit Carson RV Park Thursday morning. Collins is a student at Northern Arizona University and is among a small but growing contingent of students who are living full-time in campers.

Craig Collins’s fifth-wheel camper is one of dozens tucked between tall ponderosa trees at Kit Carson RV Park in west Flagstaff, Ariz. Collins has lived at the park with his girlfriend and newborn baby since last summer.

It wasn’t a free-wheeling, always-on-the-road lifestyle that brought him here, Collins said, but cost, according to the Arizona Daily Sun.

“I just realized that for sure it’s gotta be cheaper to rent an RV space than pay $1,300-plus for an apartment or a house,” the Flagstaff resident said.

After putting down about $9,000 for his fifth-wheel, Collins now pays $660 per month to rent a spot at Kit Carson, which is about half what he was paying to rent a house on Flagstaff’s east side.

Finances are tight in part because Collins is a student at Northern Arizona University, where he is studying mechanical engineering.

He is among a small but growing contingent of students who, faced with rising rents and scarce housing supply, have turned to fifth-wheel campers as their full-time homes.

Managers at two year-round RV parks in town said they both have seen rising numbers of students signing up for site leases. Many say it’s less expensive than a dorm room or renting a room off campus, said Holly Savinelli, the assistant manager at Kit Carson. Over the winter, 19 of the park’s approximately 100 long-term residents were students, which is the highest proportion park managers have seen in at least three years, Savinelli said.

The ratio is about the same at Black Bart’s RV Park near Little America. There, 20 of the 90 long-term residents are students, said Jennifer Yazzie, co-manager of the park.

Yazzie said for many students, living in the park also allows them to get away from the hustle and bustle of campus.

Both parks have student rates that range from $490 at Black Bart’s to $660 per month at Kit Carson. They also offer month-to-month leases, which allows students more flexibility, Yazzie said.

Often, the arrangement is made more affordable because students will borrow units from their parents or grandparents that have been sitting unused or barely used for years, said Lindsey Gabriel, co-manager at Black Bart’s.

“It’s on the up and coming,” she said of camper living.