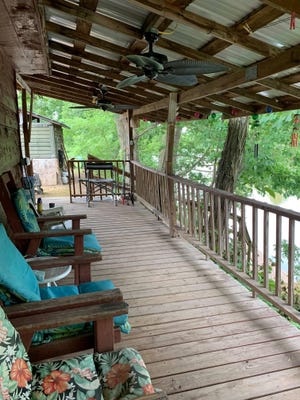 Rebecca Hoff and her family wanted to find a use for a piece of land that they’ve owned in Cottageville, W. Va., for quite a while, according to the Jackson Newspapers.

Then, there was a need for contractors from the Mountain Valley Pipeline to set up camp and that’s when it clicked — they’d use the land for a campground.

“We had a large parcel of land that was just sitting there looking like a farm and not being used,” she said. “Initially, there was a need for it.”

But now the pipeline has been nixed and the family is leaning into the camping business even more by offering more options for those who stay on the site.

Now, nearly four years later, Blue Heron Landing Campground has grown. Hoff, her mother Susan Hoff and sister Teresa Poole have come up with a five-year business plan to help with expanding the campground, located in Cottageville. Their goal is to make it a family campground that people keep coming back to year after year.

This year, they’re setting up a bathhouse for campers, a new barn available for events and kayaks to rent and launch onto Mill Creek.

The river cabin has a large covered porch overlooking Mill Creek with access to a dock and a larger fire-ring area. The cabin, which is newly renovated, sleeps five people in two bedrooms.

Another option besides roughing it in a tent or bringing your own camper is the River RV, which has a slide-out and sleeps three.

The barn is their newest addition.

“Originally before even the RV park concept was solidified, our barn was part of the large farm that from what I can tell had been established back before the 1940s. And when my grandparents bought the farm, the barn was already there. So it was utilized in the farming land for many years,” Hoff said. “And the barn time in 2017, the barn was kind of leaning a little bit. It has hewn logs in it, so we consulted the Amish out of Somers County to come and look at the barn and to see if it could be salvaged. And they had a great plan to salvage the barn. It really is a beautiful rustic barn, it has been rehabbed there is new wood, but inside we have the old hewn logs still there.”

They envision people renting out the barn for events like birthdays, graduations, weddings and gatherings.

“We can imagine, I mean just about anything,” Hoff said. “If you’d want to get people together, we can put you provide chairs and tables for 50 Plus … we’ve got seating for that. It’s pretty much a blank slate, in many ways. It’s a big open area that you can do what you want.”