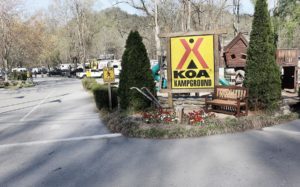 The entrance to the Townsend KOA.

Sometimes a risk is worth taking.

It was 1996 when Mark Chipperfield and his wife, Samantha, thought they’d take one, according to The Daily Times. It started to develop when Mark’s father reached out, asking for a helping hand at his Little River Village campground in Townsend, Tenn.

The Arizona couple wasn’t tied down with children just yet, so they hopped on an airplane and traveled nearly 2,000 miles to aid his parents.

One trip turned into the Chipperfield duo quitting their full-time jobs and moving to 8533 State Highway to assist with the family-run campground.

“We quit our professional jobs to get paid $7 an hour,” Mark told The Daily Times. “We got a U-Haul to come out here. We started working with them, and they were getting tired and needed to retire. We didn’t have the resources to buy them out of the business. We didn’t have a plan, minus we knew we needed to do something because in this business, you have to be able to deal with people.”

It was a plan Mark and Samantha thought they didn’t have, but there was one evolving. On a summer day in 2006, that plan appeared on a campground stairwell, when businessmen, donned in fancy attire, were walking down it.

Mark’s initial thought was far from the truth.

“Another inspector of some sort,” Mark remembered thinking, “so I intercepted them and said, ‘Hey, can I help you guys?’”

“One of the guys was from Mississippi and he said, ‘I used to camp here on the river as a little boy’,” Mark recalled. “‘I want to show these guys where I used to camp. Is that OK?’” 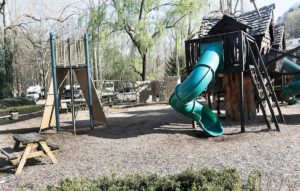 A playground at the Townsend KOA.

Mark agreed, but was still curious so he continued to pick their brains.

“I said, ‘What are you doing in town? It looks like you’re on business,’” Mark remembers asking.

“‘We are with Kampgrounds of America (KOA). We were here to buy that campground right over there’,” said the president at the time of KOA, Mark said. “‘You guys aren’t for sale because we’d really like to be in Townsend and have a presence here’.”

The site KOA wanted to buy is now called Little Arrow, and is right beside the Chipperfield’s grounds, but it was sold just 24 hours before the businessmen showed up that summer day.

It put everything together and sparked a light-bulb moment for Mark, as he instantly responded, saying his dad was looking to sell for the right price.

The negations started at a rapid-fire pace and by the time February 2007 rolled around, the once Little River Village was one of now nearly 500 KOA campgrounds across the United States and in Canada.