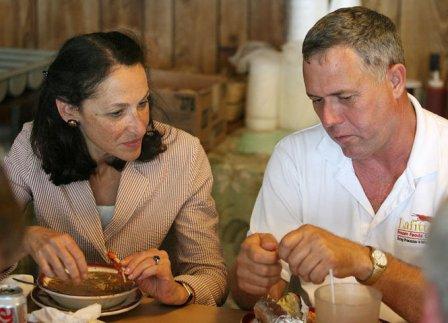 Dr. Margaret A. Hamburg, Commissioner of Food and Drug, eats some seafood gumbo in New Orleans. Photo courtesy of the FDA and the Times-Picayune, New Orleans.

Photos of fish with sores may raise concern about long-term environmental effects of the massive BP oil spill — but federal health officials say the Gulf seafood that’s on the market is safe to eat, The Associated Press reported.

“It’s important to emphasize that we’re talking about a low percentage of fish,” Dickey stressed. “It doesn’t represent a seafood safety hazard.”

Two years after the oil spill, scientists cite lesions and other deformities in some Gulf fish as a sign of lingering environmental damage. They can’t say for sure what’s causing the fish ailments or if there really are more sick fish today than in the past.

The spill hurt tourism, including campground business, in the entire Gulf Coast area.

Click here to read an FDA report on seafood safety.