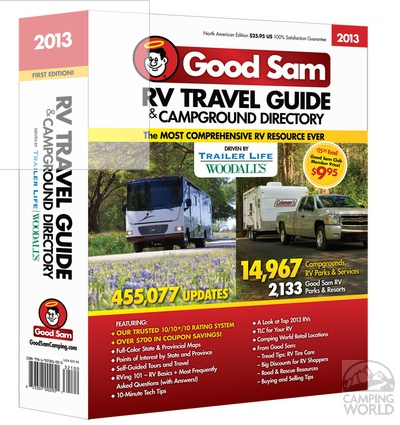 One of the most game-changing exhibits on hand for the 550 attendees at the recent National Association of RV Parks and Campgrounds’ (ARVC) annual Outdoor Hospitality Conference & Expo was that of Good Sam Enterprises LLC, where Ann Emerson, vice president and publisher of the all-new Good Sam RV Travel Guide & Campground Directory, was working to spread the word on the rollout of Good Sam’s first consolidated campground directory.

Some 425,000 copies of the new print directory, a merging of two respected titles, Woodall’s North American Campground Directory and the Trailer Life Directory of RV Parks & Campgrounds, were to be released in December. And the fact that they’ve been combined is big news in the accommodations sector, as the two were often referred to as the “Bibles” of the campground arena for millions of traveling RV enthusiasts over the years.

The two publications had been co-published since the mid-1900’s by Good Sam Enterprises LLC and its predecessor, Affinity Group Inc.

The consolidation was announced earlier this year.

“I wasn’t sure what park owners were going to think when we went from two directories to one because Woodall’s is a strong brand, as is the Trailer Life Directory,” said Emerson. “But, overwhelmingly, park owners have said ‘yes.’ They have one set of directory rep teams to work with, one marketing plan and one marketing investment and rating system to understand.”

Emerson, at the same time, is spearheading the announced expansion of the Good Sam RV Park & Resort Network from her Ventura, Calif., offices in what amounts to another new twist for Chicago area-based Good Sam as it seeks to extend the reach of its discount camping network to a host of new North American park operators. And Emerson says things are going well with that as well.

“We started in 2012 with 1,667 Good Sam Parks in the network,” Emerson told Woodall’s Campground Management, now an independent publication based out of Elkhart, Ind. “We are ending the year with 2,133 Good Sam parks in the network. We’ve had explosive growth. The great part about that is you still have to maintain a certain rating before you can be invited to the network. We didn’t lower the quality of parks.”

So, Good Sam has been getting the word out on both fronts at the ARVC Conference and elsewhere. “We’re talking about the Good Sam brand and how the power of one investment in our directory gets you exposure to our Good Sam members, which is 1.3 million members,” said Emerson. “We also have our AAA relationship intact, the hallmark of the non-Good Sam RVer. Through a contract, AAA buys hundreds of thousands of our print directories and gives them to their AAA clubs throughout the country, and those clubs either give them to their members free or for a small charge.

“And we still have our circulation through our bookstores, obviously through Camping World, which is a big circulation channel for us as well. There are 100 Camping World (RV rolling stock and parts & accessory sales) locations.”

On the digital side, Emerson reports, the Trailer Life and Woodall’s websites are also being merged as Good Sam parks retain aggressive web exposure on the Good Sam Club site. “We have mobile apps in the digital market as well,” says Emerson. “What we do is walk into a park operator and say there’s one investment that they need. And they need to do it through Good Sam. And we work really hard to also promote our non-Good Sam parks. You can be in our directory without being a Good Sam Park.

“We obviously work really hard taking care of our Good Sam-member parks as well. Our rep teams are walking into parks and telling them we have one story to tell,” she added. “When you are with Good Sam, you are reaching this entire market, print and online.