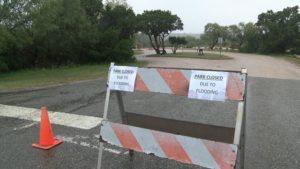 Barricades block Texas parks that are closed due to flooding.

Five Texas state parks are closed to the public after recent Central Texas flooding forced Texas Parks and Wildlife to block off driveways and trails due to high water, according to everythinglubbock.com.

“Whenever we have these flooding events, unfortunately, it does lead to closures,” Spokesperson Stephanie Garcia said.

Garcia expected the weather to impact visitor numbers but encouraged Texans to visit one of the other 90 parks statewide that were not affected by flooding last week.

“We usually see a good amount of visitors during the fall because fall is such great weather that a lot of people go out and go camping, or go walk some of our trails and go bike or even go fishing,” she said.