By: Jeff Crider|Published on: May 17, 2021|Categories: Industry News| 0 comments 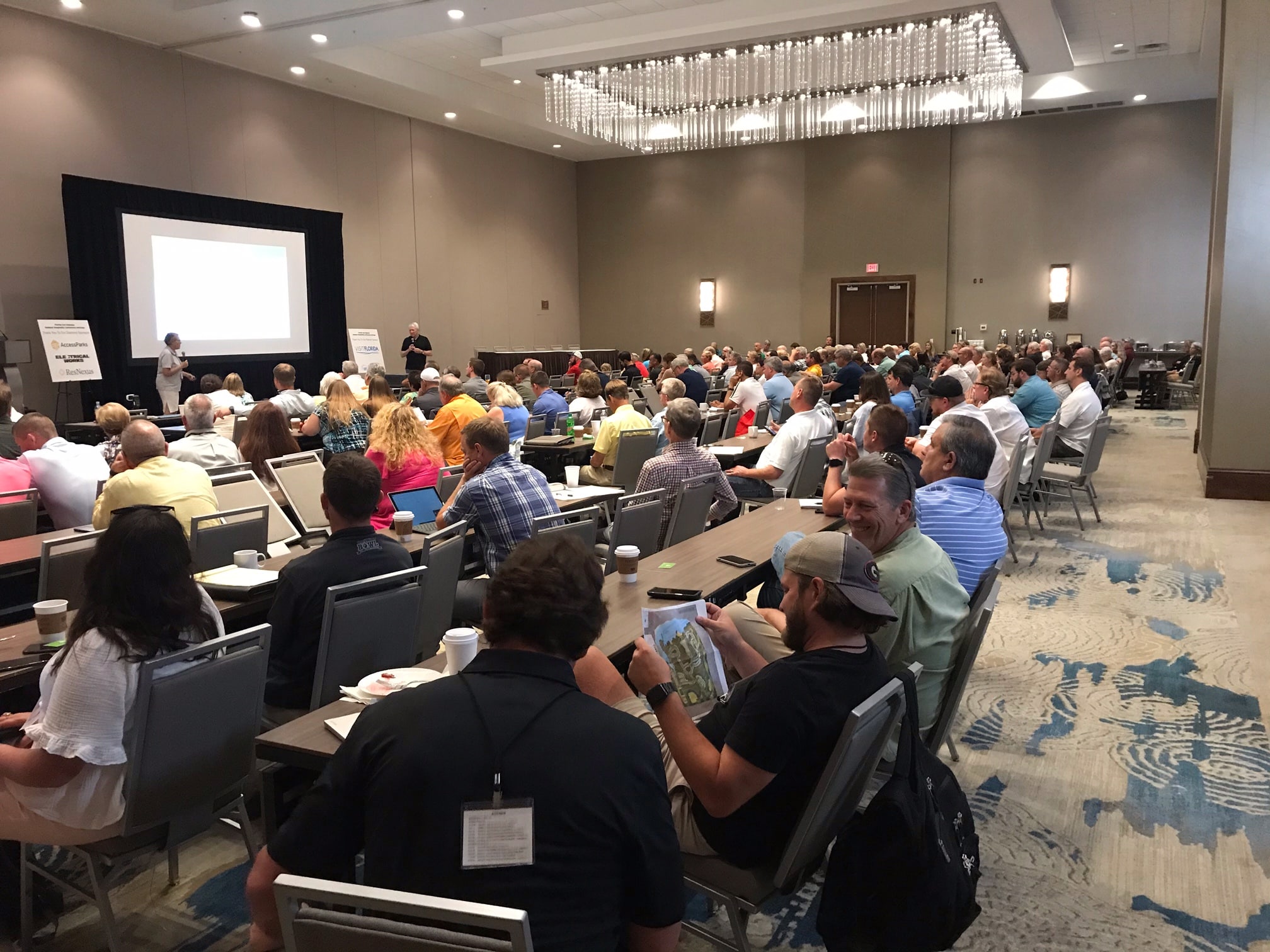 The joint conference was a record-breaking one for both Florida ARVC and Alabama ARVC.

Roughly 330 people attended the May 11-13 event, including representatives of more than 100 parks and 58 campground industry vendors.

“This conference broke attendance records,” said Thomas Sparrow, who serves as chairman of the two-state association headquartered in Tallahassee. He noted during the association’s annual breakfast meeting that the group has kept its focus on achieving three objectives. These include stepping up Florida and Alabama park operator involvement in state and local government races; working to pass legislation in both states to protect park operator interests; and increasing the association’s investments in CampFlorida.com and CampInAlabama.com to promote parks in both states.

First, the new law, which took effect July 1, 2020, transfers the permitting of RV parks and campgrounds from cities to the Florida Department of Health and to county health departments. The new law also makes it easier and less costly to rebuild RV parks after a storm event or other natural disaster by allowing park operators to rebuild their parks according to the same density that was approved and permitted before the storm event.

Bobby Cornwell, the association’s executive director and CEO, said the legislation was needed because park operators in many cases were being prevented by local governments from rebuilding their parks with the same number of campsites after major storms.

HB 343 also clarifies Florida regulations to give park operators and law enforcement agencies much greater clarity in identifying the specific situations in which park guests can be removed from RV parks and campgrounds.

The association also secured the passage of two important bills for Alabama’s RV park and campground industry, Senate Bill 308 and House Bill 456, which were signed into law effective September 2019.

The passage of Alabama Senate Bill 308 enables Alabama RV park owners and campers statewide to save hundreds of thousands of dollars in sales taxes by capping the sales tax on RV sites to a three-month stay and provides for no sales tax collections if the guest is staying longer than three months. Alabama House Bill 456 provides for the immediate ejection of guests who display bad conduct or deal in illegal substances while they are guests in an RV park, regardless of the length of stay.

Conference attendees were briefed on legislative efforts in other states by Michael Hobby, a National Association of RV Parks and Campgrounds (ARVC) board member who owns Moon Landing RV Park and Marina in Cross Hill, S.C. Hobby said nine states have introduced campground liability legislation similar to Wisconsin Assembly bill 174, which provides immunity to private campground operators from lawsuits involving a variety of risks that are inherent to camping, such as dangers caused by trees, roots, rocks, mud, sand and soil as well as natural bodies of water, a lack of lighting, weather and insects, birds and other wildlife. Wisconsin’s “Inherent Risk Law” took effect April 1, 2016.

On the marketing front, Sparrow said association members have reaped benefits from increased investments in website marketing, scoring a 33% increase in visitors to CampFlorida.com from 1,533 to 2,037 per day. “They’re not clicking on there to wish somebody happy birthday,” Sparrow said. “They’re clicking on there to find a place to camp in Florida.”

Sparrow said the association plans to increase its investments in marketing and public relations efforts. Jeff Crider, the association’s publicist, told conference attendees that media outlets are especially interested in information about new and expanding and improving parks, as well as interesting information about the changing demographics of RVers. He encouraged park operators to participate in the association’s media outreach efforts by responding to emailed questions as he gathers information for upcoming articles and news releases.

Financially, the association is on strong footing, thanks to increased park membership, which has increased association revenues higher than expected, said Pat O’Neill, association treasurer. The two-state association currently has 475 members, including 45 parks in Alabama.

The three-day conference included several educational talks on topics involving online marketing and media relations, legal issues, as well as cracker barrel sessions involving what it takes to build and operate a successful RV park and how park operators can use technology, equipment and services to grow their business.

While the RV industry is experiencing record growth right now, which has been fueled by the pandemic, the industry also has to work harder to hang on to newcomers to camping and RVing, said Sandy Ellingson, a strategic business and technology consultant based in Columbus, Ga., who gave the keynote address.

Ellingson said the RV industry’s “ecosystem” is comprised of four parts: manufacturers and suppliers; dealers; campgrounds and campers. “All parts of the ecosystem are important to each other,” she said, adding the biggest risk to the RV industry right now are the people identified as “casual campers” in the latest RVIA demographic study, especially COVID campers.

“They are the most volatile part of the ecosystem right now,” Ellingson said. “We have less than 12 months to convert them to either avid or family campers. Only parks have the power to do this. We must provide casual campers with known and desired sites to camp at and the experience they expect. We cannot build enough sites fast enough so we need existing parks to help by fulfilling these expectations. This can be done by upgrading technology so they can be found online and booked online, converting long-term sites to transient sites when possible and in high-traffic areas.” 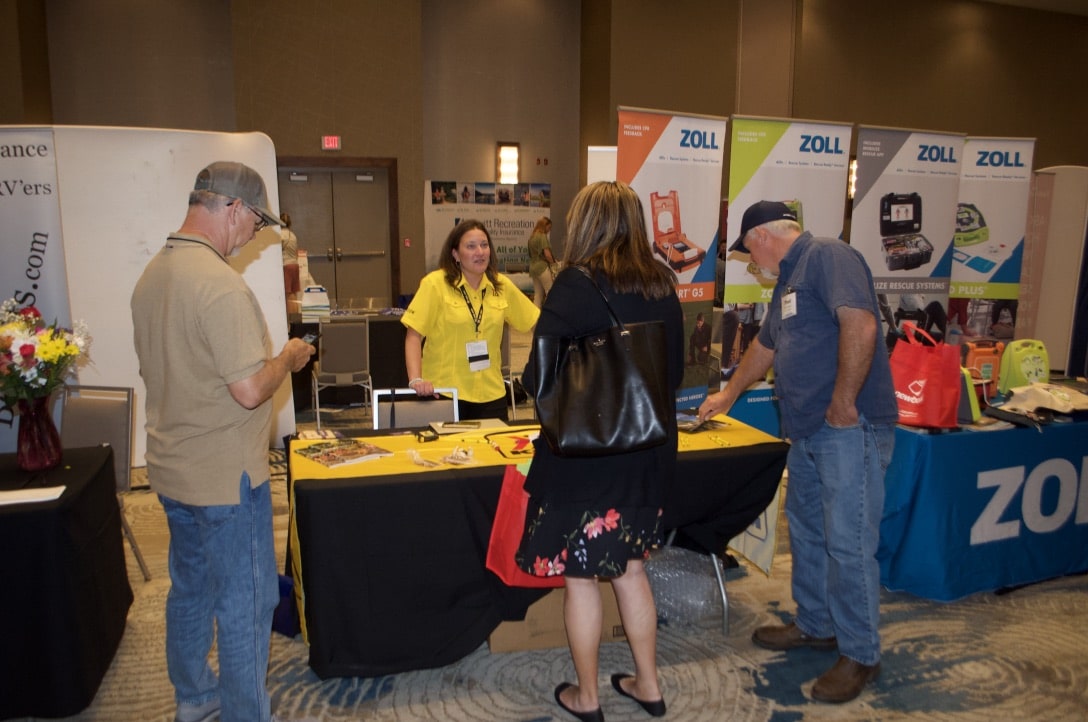 Poisson also encouraged park operators to use the latest KOA camper report because it highlights what consumers want to see in a campground. “They want to get away from all the noise,” she said, and enjoy quality family time outdoors.

This information alone signals the importance of using photos on park websites that highlight the park’s ability to provide guests with a place to escape, as well as outdoor activities. Of course, park operators also have to do a good job of maintaining their campgrounds and ensuring that they provide a clean, secure and attractive place for people to camp, she said.

“You only have seven seconds for that first impression and you’ll never get it back,” she said. “It all starts with your signage. Is your sign fresh? Is it faded? Is it nicely landscaped?”

Poisson also highlighted the importance of keeping parks well maintained. This involves everything from restrooms to roads and campsites. “Good or bad,” she said, “(campers) are taking pictures of your park and posting them on social media.”

Stephen Hudson, president and CEO of Jacksonville, Florida-based Digital Mark Company, discussed a new downloadable app he developed for association members, which gives association members the ability to provide mobile messaging to their guests for real-time information on activities, local attractions and other information.

Since all Florida and Alabama member parks have been loaded into the app, guests can use the app for trip planning. The app also supports banner advertising, so park operators can use it not only for direct communication with their guests but as a way to generate revenue from local businesses that would also like to reach their park guests.

Sparrow, the association’s chairman, said park operators in Florida and Alabama have an unprecedented market opportunity with the influx of record numbers of new RV owners.

“We are the epicenter of the North American RV market,” Sparrow said, noting that the demographics of RVers are becoming younger.

“The ball is in our court,” he said. “The question will be: ‘Do we keep it in our court or is it taken away from us? We’re not going to send our guests back to traveling to Europe and cruise ships. We are going to keep the ball in our court.”