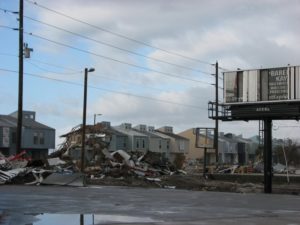 This is a scene in Mexico Beach, Fla., nearly two months after Hurricane Michael hit.

Tom Adams, who runs Mexico Beach Charters in the Florida Panhandle, moved his main fishing boat, the Nauti-Dogg, about 4 miles inland to save it from the wrath of Hurricane Michael, according to the Atlanta Journal Constitution.

The Category 4 storm, packing winds of 155 mph, found it anyway.

It’s been nearly two months since Michael, one of the most powerful storms to hit the United States, devastated Mexico Beach and caused significant damage in a few neighboring communities.

The Nauti-Dogg still rests at the place Adams once considered safe harbor in an inlet off the Intracoastal Waterway, where he has to trudge along a muddy path and over downed trees to get there. His boat, though, is partly submerged under about 8 feet of water.

Adams, 65, also lost a home he rents out and three cars.

It could be at least two years before his fishing business, which once brought in about $60,000 annually, fully recovers.

“It’s pretty heartbreaking,” said Adams, who said he is still fielding calls from people who want to go fishing. He has a second, smaller boat that he could use to take people on shorter distances from different locations, but it will cost him more in fuel and time.

The Panhandle is a favorite year-round destination for people from Alabama, Georgia, the Carolinas, Florida, Tennessee, Texas and Canada, who crave its picturesque white sandy beaches and laid-back, nostalgic feel. A good number of Georgians have also moved to the area after retirement or have second homes there.

Today, though, it still looks like nature dropped a bomb.

Along the Highway 98 corridor in Mexico Beach, the destruction is appalling. Pine trees are snapped in half or leaning precariously toward the ground. There are no hotels, no restaurants and practically no structures that escaped total devastation or serious damage.

Kimberly Shoaf, president of the Mexico Beach Community Development Council, lost her home in nearby Port St. Joe. She estimated that between 60% and 75% of the rentals are gone or unusable. She said two of the city’s four hotels were demolished by Michael, one can be salvaged and she’s not sure about the fourth. There are also two RV parks, which are home now to volunteers, displaced residents, second-home owners and workers there to help.