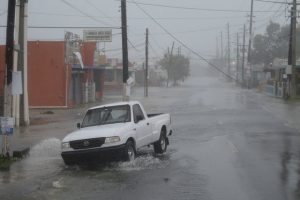 A man drives through rain and strong winds during the passage of hurricane Irma, in Fajardo, Puerto Rico, Wednesday, Sept. 6, 2017.

Florida’s RV parks and campgrounds were busy evacuating guests Friday morning (Sept. 8) as Category 5 Hurricane Irma barreled toward the Florida mainland. In Alabama, Georgia and other surrounding states, campgrounds and RV park owners are busy trying to clear space for thousands of evacuees who are heading north attempting to stay out of the path of the epic storm.

Polly Wilson, manager of Clewiston RV Resort, in Clewiston, Fla., located about 100 miles north of Miami in the middle of the state, said that they had just received an evacuation notice Friday morning.

“We have brought our outdoor furniture inside and boarded up the windows,” she told Woodall’s Campground Management, a sister publication of RVBusiness. “Our guests are strapping down everything they can.”

Wilson said the resort had about 50 guests left at the park Friday morning and that the staff was providing water and other supplies to those planning on weathering the storm at the resort while long lines were forming throughout Florida for supplies, especially gas, according to the Associated Press.

Florida Gov. Rick Scott declared a state of emergency in all 67 counties to give local governments “ample time, resources and flexibility” to prepare for the storm. President Donald Trump also approved a federal emergency declaration for the state ahead of the storm, according to the Federal Emergency Management Agency (FEMA).

Scott warned that although officials don’t know the storm’s exact path, winds are likely to be “extreme and life-threatening” and the impacts could be felt inland, away from the coast. He said Floridians needed to follow evacuation orders. 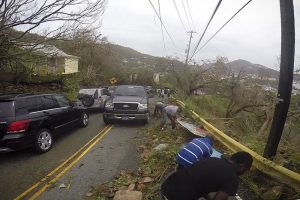 Walt Disney World has begun evacuating their Fort Wilderness Resort & Campground, but at this point, along with Universal Orlando and Sea World, have made no plans to shut down their parks or alter the normal hours of operations. The storm is projected to reach the southern part of the state Saturday and some tracking models have the Category 5 Hurricane reaching central Florida on Monday.

Each park has refund or rescheduling policies in place for park visitors who may not feel comfortable visiting Orlando this weekend.

In a concerted effort to stay in touch with members and keep apprised of evacuation efforts, Bobby Cornwell, president and CEO of the Florida Association of RV Parks and Campgrounds (FARVC), continues to work the phones as Hurricane Irma draws nearer to the state.

“I feel confident that evacuations have been made all along South Florida and on into the Keys where there’s a heavy concentration of campgrounds,” Cornwell related. “It still looks like the East Coast is going to take the brunt, so we’re hearing about evacuations out of the Fort Lauderdale area and on up all the way to Jacksonville. It sounds like everybody is taking precautions to get all the campers out.”

Cornwell reported that FARVC, which also represents Alabama parks, had also been in contact with facilities north of the border that were taking in evacuees.

“Campgrounds in Alabama have been taking in evacuees for the past four or five days, and are pretty much filled already,” he said.

Adding to the problem, heavy traffic has piled up on all the main arteries in Florida, most prominently I-75 and I-95.

“I was coming back from Alabama yesterday on I-10, and it was jammed,” Cornwell said. “All the reports on I-75 and I-95 say it’s bumper to bumper.”

One of the Alabama campgrounds welcoming evacuees is Sherling Lake Park & Campground, in Greenville. Manager Bill Smith said they have 50 campers staying on 41 sites, as he tries to find room for everyone who needs a place to stay. 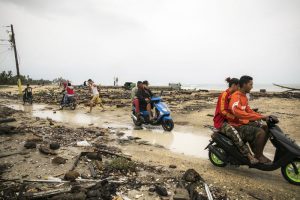 In the Dominic Republic neighborhoods were leveled. (AP)

“We have tents and people with generators staying out in the parking lot,” he said. “The people who show up are thankful and grateful to be off of the highway. Some have had to travel 16 hours straight in a lot of traffic just to make it here, so they are weary.”

He said that the calls for open sites started Monday and that he had campers showing up Tuesday. “Since then it has been a mad house here,” he said.

The same story is playing out 120 miles southeast at Lizard Landing Campground in Columbia, Ala., where owner Greg Cooley said that his 27 sites are full of evacuees.

“We have had to turn some away,” he said. “We had one woman who broke down on the highway and called asking if we had a spot that could handle her fifth-wheel. It had taken her 12 hours to make what would normally be a six-hour trip. She broke down crying when she got here.”

Smith said all of the evacuees were thankful just to be somewhere safe.

At Talladega Motor Speedway, in Talladega, Ala., Sarah Hollingsworth, the public relations coordinator for the racetrack, said that they have had around “two handfuls” of evacuees make it to the speedway campgrounds. The track had opened its campgrounds to evacuees on Thursday.

“Our chairman, Grant Lynch, went out and passed out donuts this morning,” she said. “We have been receiving a lot of calls on the campsites that are available and we expect a lot more to come throughout the weekend.”

She said the speedway can hold up to 180,000 people on a race weekend and that their staff will actively work to find space for everyone who might need a place to stay. The campgrounds include hot showers, restrooms, water hookups and two dump stations. 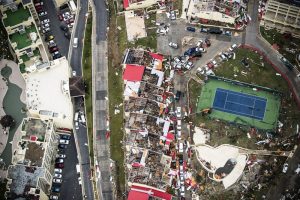 In St. Martin roofs were ripped off buildings. (AP)

Other areas accepting evacuees are national parks. The U.S. Department of Agriculture (USDA) announced Thursday that it is waiving all campground fees at national forests in the southern region, which includes parks in Kentucky, Tennessee, North Carolina, South Carolina, Georgia, Alabama, Mississippi and Louisiana.

Cornwell did offer “a glimmer of good news” for the campground community amid all the confusion.

“You know, RV parks do seem to rebound after a storm like this,” he said. “There aren’t a lot of structures as the majority of the properties are open land. Also, in the area around Miami there’s probably around five or six parks because outside of Miami proper the land is pretty undeveloped.

He added, “Like everyone else we’re just waiting to see how this storm develops, but it really looks like anything east of St. Augustine is going to get hit.”