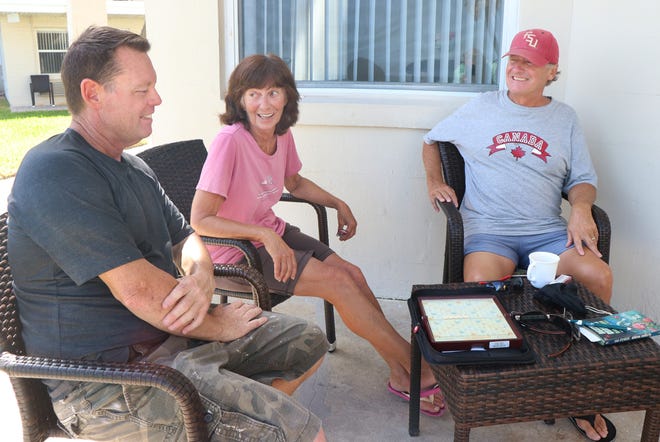 Andrew Hands (at left), co-owner of the Ocean Court Motel in Daytona Beach, Fla., visits with the only Canadian guests in the motel so far this fall.

Some familiar faces are missing this fall at the Ocean Court Motel in Daytona Beach, Fla., a reflection of COVID-19-related restrictions on travel across the Canadian border that has cut-off a key segment of snowbird visitors to Volusia and Flagler counties, writes Jim Abbot at The Daytona Beach News-Journal.

“It’s not good at all,” said Andrew Hands, who owns and operates the 33-room property on State Road A1A with his father, David. The motel has a long list of Canadian guests that make annual trips that typically unfold like clockwork, but won’t be happening this year, Hands said.

“We had a group of 20 golfers that canceled,” he said. “That’s a lot of money lost right there. Another lady who comes for a month in October, she hasn’t been able to come. People are canceling for January, February and March already. They don’t like the way things are looking.”

In response to the coronavirus pandemic, the Canadian government closed the Canada-U.S. land border to non-essential traffic on March 21. That ban recently was extended through at least Nov. 21.

The Canadian government does allow its citizens to travel to the United States by air, but travelers are subject to 14-day quarantine when they return and the government has advised travelers that Canadian health insurance may not pay their medical fees for illnesses contracted outside Canada.

For hoteliers and other tourism-reliant businesses in Volusia and Flagler counties, the Canadian market has long been an essential source of visitors during winter months, a time of year outside the peak beach season when hotels can particularly use the business, said Evelyn Fine, president of Mid-Florida Marketing & Research.

This year, in the wake of the worldwide tourism downturn tied to the pandemic, the need is heightened even more, Fine said. Canadian visitors account for 3% to 4% of Volusia County’s tourism visitors annually, trailing only a handful of states — Florida, Georgia, Ohio, New York and Illinois — in its impact on the county’s largest industry, Fine said.

“It’s substantial on an annual basis,” she said. “In terms of what it means to the fall season, they are a major market for us in the fall and the fall is when we really need the business.”

This year, the outlook isn’t encouraging, according to many hoteliers.

“We have had a couple of cancellations for our Canadian visitors and several have called to say they want to keep their reservations, but they are waiting to see what happens,” said Aileen Band, who teams with her mother, Audrey Dando, to operate Tropical Manor On the Ocean, a 40-room hotel that has been a fixture for more than 60 years on South Atlantic Avenue.

“So we’re keeping our fingers crossed right now,” Band said. “During the winter, it is very important because up to maybe 40% of the winter visitors are from Canada. They normally stay for one to three months.”

Band said she has contacted the Daytona Beach Area Convention & Visitors Bureau about crafting a marketing plan targeted to such seasonal visitors.

Given the reality of the moment, the CVB is now focusing on drive markets regionally and statewide, though that could change as events dictate, said Kate Holcomb, the CVB’s director of communications.

“What we are seeing in our data is that consumers are still booking travel closer to home and closer to the date they plan to travel than they have before,” Holcomb said by email. “We will continue to focus our advertising campaigns on our primary drive markets (within a 2- to 4-hour drive) for now, and we have the flexibility to adjust markets, message, audience at any time.”

In Flagler County, the influx of Canadians also is expected to decline at the Beverly Beach Camptown RV Resort in Flagler Beach, said Ginnie Mercer, operations manager of the business that offers 145 RV sites.

“In the past, it has been up to 10% (of our business), I’m just not sure that we’re going to be seeing that this year,” Mercer said of Canadian travelers. “We may have had a couple of cancellations already.”

“It’s pretty scary looking forward,” Brown said. “Most of our winter business for October, November, December and January is Canadians and the Canadians are not coming.

“We’ve had tons of cancellations from our Canadian guests,” Brown said. “Between now and February, we have hardly anything on the books. We’ll see what happens, but it’s not looking very bright at this point. It’s not a good situation.”

‘A big chunk of change’

Based on feedback from focus groups, Fine reports that Canadian visitors tend to stay longer than other leisure travelers, sometimes for a month or more. They also are intensely loyal, typically returning again and again to the same hotel or condominium property.

That’s the case at the Ocean Court, where at least one regular Canadian couple did return in October for one of their multiple annual visits.

“We’re missing some of the regulars we might ordinarily see,” said John, 74, watching the ocean waves from his beachside room alongside his wife, Marlene. 66. The retired couple didn’t want to provide their last name due to security concerns because they are away from their home in Calgary for a month

They traveled by air on Canada’s second-largest airline, WestJet, to Orlando, then on to Daytona Beach by car. Many other regular Canadian guests at the motel are from Ontario, but decided not to drive to Daytona Beach during the pandemic, John said.

“A huge number of the people who drive are seniors and they may not be interested in flying because of the pandemic,” John said. ”When we go back to Calgary, we’ll have a two-week quarantine. If you’re working, you don’t want to miss two more weeks of work.”

The couple has been staying at the Ocean Court three times a year for the past decade, John said. On the beach or on the porch outside their room, they don’t need to worry about social distancing, he said.

“Being six-feet apart isn’t a problem,” he said. “We haven’t gone shopping or out for meals. We keep our distance. We’re here to be on the beach.”

Unfortunately for the area’s tourism industry, there aren’t many other Canadians joining them, as the border ban has had a devastating effect on that nation’s travel habits.

The number of trips across the Canada–U.S. border plummeted from 7.9 million in July 2019 to 347,100 during the same period this summer, a decline of roughly 96%, according to Statistics Canada, the country’s official government data collection organization.