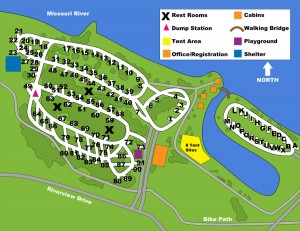 Click here to watch a video of the following story, courtesy of KCAU-TV, Sioux City, Iowa.

Scenic Park Campground. It was one of the first areas in Siouxland devastated by last summer’s historic Missouri River flooding. Finally almost a year layer that campground is set to reopen, KCAU-TV, Sioux City, Iowa, reported.

Last summer’s historic Missouri River flood left behind significant damage at Scenic Park Campground, located in nearby South Sioux City, Neb. Some cabins, under as much as eight feet of water, now have to be replaced. Crews are still working on getting this place suitable for its faithful campers who are waiting to make more memories.

“You lose the river, you lose your friends and stuff like that so it’s not good,” said veteran camper Mike Keegan.

And Brenda Harder says “It is devastating to see. We’ve come and checked on the progress since last year when it all started happening and we haven’t been able to camp.”

But that will soon change. This week workers have restored the electric service, water and cable that’s provided to campers. But it’s going to be hard to replace the 450 trees that were lost.

South Sioux City’s Parks Director Gene Maffit says, “Of course it takes years for trees to grow so that’s probably going to take the longest to put back. We are going to put some larger trees in this park so you’ll see some changes in the next weeks.”

The campground is expected to be open in the upcoming week but you won’t be able to make reservations until May 1.