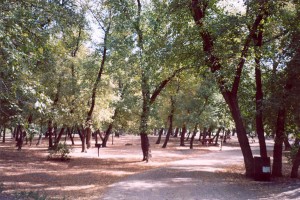 The Woodlawn Regional Park, located near Estavan in extreme southern Saskatchewan, has revealed plans for the future that will allow it to move forward following last year’s devastating flooding that saw many of the park’s campsites damaged or washed away by the Souris River.

Their ambitious goals include the addition about 160 new campsites for campers and tents, the possible construction of cabins, the restoration of several amenities and structures, and a redesigned access road, Estevan’s Lifestyles reported.

Ninety of the campsites will be built in the main campground area near the Souris River, according to park manager Nathan Puffalt.

“We have also reclaimed the old chuck wagon track, and we should be able to have 70 new sites out there,” said Puffalt. “In total, we have 160 sites, in addition to the current sites that we were using for seasonal campers this year.”

The 90 sites near the river should be ready to go for next year, Puffalt said. Woodlawn had 50 seasonal sites at the Souris River campground this year; those were located further inland from the river.

The chuckwagon track sites are expected to be constructed in 2013; as they are built, and as they are serviced, they will be made available to the public.

The park has managed to make use of some of the silt from last year’s flooding in the rebuilding effort. Silt was piled as much as 10 feet high in the main park area last year.

“What we did with that silt, is in the park, there were a few low spots and a few valleys that we were able to fill, and reclaim quite a bit of land,” said Puffalt.

Those areas can now be used to construct campsites, which will create more revenue and, in turn, make the park a better place, Puffalt said.

Woodlawn’s main access road will remain in the same location, but the access road for the new, main campground will be about 60 to 80 further east from the old main campground entrance. The entry area had to be relocated because of its proximity to the Souris River.

Woodlawn also has plans to construct cabins that will be located along the new campground access road. Puffalt views this as a natural evolution for the park.

“When you look at other parks in the region, and other parks around Saskatchewan and Canada, a lot of them are starting to go with offering cabins. I think it’s only natural that we create these cabins, and evolve to allow people who want to come in, who don’t have campers themselves, and don’t want to tent, but still want to enjoy a nature surrounding,” Puffalt said.

The cabins would not be available for purchase.

Puffalt hopes there could be a couple cabins available in 2013. Then they would add one or two more every year.

Campers who prefer to sleep under a tent will find that they haven’t been excluded in the park’s redesign, as there will be 20 to 40 sites available.

Other amenities inside the park are in the process of being restored. The majority of the playpark structures were salvaged. Some new playground equipment had to be ordered.

Rotary Park, which is located in the heart of Woodlawn, is currently being renovated and refurbished, and the Doug Third Hall, located in the park’s northeast corner, is also being restored. Puffalt said they should be usable next year.

The main access road to the park will be gravel for the time being, but there will be two lanes on each side of the gate house, which will make it easier for traffic. The gate house is in the midst of being repaired and updated.

Woodlawn received $2.4 million from the Provincial Disaster Assistance Program (PDAP) to assist with the recovery. Puffalt said they appealed the amount, as they weren’t satisfied with PDAP’s offer, but PDAP didn’t budge on the amount.

Puffalt admits that there is concern about the possible recurrence of last year’s flooding. New campsites are still at the mercy of the river. But additional flood protection measures will be in place in case the Souris River exceeds its banks again.

“The pedestals for electrical service are going to be substantially higher than the ones we had before, and any of the buildings that we are going to be creating from scratch, they’re going to be on skids so that we can remove them, whenever necessary, if something like that ever happens again,” said Puffalt.

The park’s authority will be working with the Saskatchewan Watershed Authority and the Ministry of Environment to shore up the river’s banks.

Even though the park was in recovery mode, Puffalt said Woodlawn enjoyed a good year. The 50 seasonal sites were all reserved throughout the camping season. Their 83 sites at their Boundary Dam campground, located on the old recreation site, were about 75 percent occupied this summer, and Puffalt said they didn’t have any vacancies at Boundary Dam on weekends.