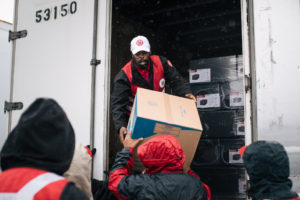 North Carolina confronted a spiraling statewide crisis on Sunday (Sept. 16) as Tropical Depression Florence slowly ravaged the region, flooding cities, endangering communities from the coastline to the rugged mountains and requiring well more than 1,000 rescues, according to the New York Times.

Sunday, it seemed, was when the storm system that had stalked the South for days — first as a hurricane, then as a tropical storm and eventually as a tropical depression — showed its full power with staggering scope. The death toll from the storm rose to at least 16 in North and South Carolina, where roads were treacherous and even the most stately trees were falling.

“It’s horrible,” said Mitch Colvin, the mayor of Fayetteville, N.C., in the eastern part of the state, where the rising Cape Fear River was expected to swamp bridges and cut his city in two in the next few days. “Things are deteriorating,” he said.

The perils stretched across North Carolina’s more than 500-mile width. Weary, drenched coastal cities were scenes of daring rescues. Waterways swelled throughout the eastern and central parts of the state, testing dams and menacing towns with floodwaters that had no place to go but up. Inch after inch of rain fell on Charlotte and its suburbs and communities in North Carolina’s western mountains feared landslides.

The storm has “never been more dangerous than it is right now,” Gov. Roy Cooper said at a news conference. “Wherever you live in North Carolina, be alert for sudden flooding.”

All 100 counties in North Carolina had at least one type of National Weather Service alert, from a flash-flood warning to a hazardous weather outlook, in effect for Sunday or the days ahead. Rain was expected to continue in parts of the state until Tuesday, but flooding on some rivers would last longer, and may not ease until the end of the week.

South Carolina faced its own set of troubles, with its death toll rising Sunday and the storm’s rains still unspooling havoc. Although Gov. Henry McMaster said flooding might continue in his state, he said he expected that South Carolina had “seen the end of the hurricane and most of the storm.”