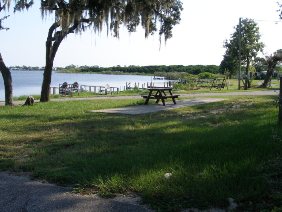 The city has accepted the runoff from the park’s water treatment plant into its settling ponds for the last 25 years, according to owner Edgar Hudson, and he doesn’t understand why the city wants to change now.

“Well, we have been doing this for a while, and now they can’t find their paperwork. They just want to charge me more for the service is all,” Hudson said.

Deleon presented documents from 1999 as his proof that there were serious problems with the plant, and told the council that he was not comfortable taking the waste water any more.

Deleon further insisted that at the peak tourist season in January, February and March, the plant at Lake Glenada could not handle the amount of volume to properly process the waste, and was discharging too many solids into Avon Park’s retention pond.

“So much fecal chloroform were present in the effluent that it could not be measured,” Deleon said. “They are handling between 22,000 and 27,000 gallons per day, but the plant is only able to handle 20,000. That overflow is going somewhere.”

But the biggest issue with Deleon was the control of what was actually being dumped onto city property.

“I am recommending that Lake Glenada shut down their plant and hook to the city water disposal,” Deleon concluded.

Hudson argued that the plant on his property was in compliance because it is inspected regularly by the DEP.

“If there was a problem, I would have been fined and cited. The records he has are from 1999, the year before I bought the park. I spent $40,000 making sure that the plant was up to date when I purchased it. I also spend a lot every year to make sure that it is in compliance,” Hudson said after the meeting.

“I don’t know where he got his figures. We only run about 10,000 gallons per day at the peak times, and the water is almost drinkable when it comes out from the treatment plant. We are not doing anywhere near the volume he is talking about,” Hudson added. “Don’t censure me for something that is not absolutely true.”

According to Hudson, he has had very little communication with the city over the matter, and was surprised that this was on the agenda.

“We didn’t even know they were going to discuss this until the last minute. We’ve had no communications and no letters. To just up and decide that our contract is no longer any good, and to make those unfactual claims, are just not right,” Hudson said.

Another issue was the billing rates, which were set 25 years ago, and according to Deleon were not up to date.

“I would go ahead and raise those rates regardless of the decision tonight. Those rates are so unrealistic that they are laughable,” Buhr said.

Hudson said that he has not received any notices from the city to date, and that he had to contact the engineering firm and gather his documents for a possible legal fight.

“We are going to have a battle on our hands, that’s for sure. We just have to get all of our stuff together and take it to them,” Hudson said.