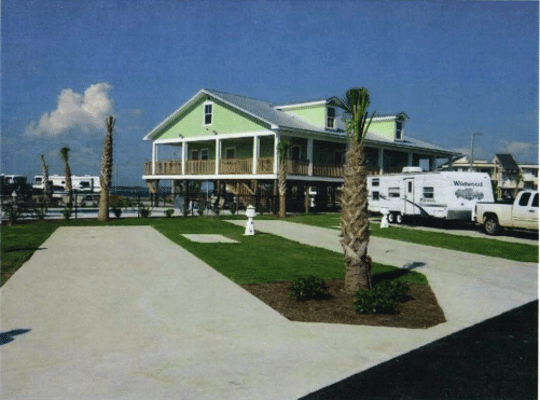 A conceptual picture shows what the clubhouse at the proposed Blackwater Bay RV Resort & Marina could look like.

A group of partners and developers that includes former Pensacola (Fla.) Mayor Ashton Hayward is looking to bring a “high end destination RV resort” and marina to the Blackwater River in Milton, upsetting dozens of surrounding homeowners who say the project will negatively affect their way of life, according to the Pensacola News Journal.

The proposed Blackwater Bay RV Resort and Marina was presented to the new Santa Rosa County zoning board on Thursday (Nov. 21) night. Hayward, who said he was one of the partners in the project, asked the zoning board to approve rezoning the 18.5-acre parcel on Ward Basin Road from its current zoning, which is R-1 single family residential, to a new zoning, P-2 active park.

But residents who live near the property showed up in force to voice opposition to the 130-site RV park. It’s the second time this year the project has come before the Santa Rosa County zoning board. The last time, in March, the old board denied the proposal after residents spoke until 1 a.m. against it. The developers pulled the project before it could go before Santa Rosa County Commissioners for final approval or denial, but they submitted it again to go before the new zoning board Thursday night.

The resort would have 130 RV sites, a 30-slip marina, a waterside general store and bait shop, a pool and hot tub, a clubhouse with bathrooms, showers and billiard tables, a playground, outdoor recreation areas and a fire pit area.