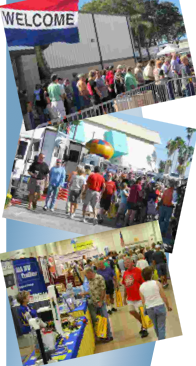 The Florida RV Trade Association (FRVTA) reported that numbers have been strong at the eight regional shows held throughout the state this year.

According to a press release, the show season kicked off with the Fort Myers RV Show in January. Marking its 27th year, the event featured 15 Gulf Coast dealers along with over 100 vendors. Show Chairman Chris Morse reported heavy traffic of over 11,500 attendees along with steady sales by participating dealers.

“While customer traffic was very good, our dealer body was very pleased with the many sales made at the show and afterward,” he said.

Results from other shows included:

The FRVTA will stage two more RV Shows this season before wrapping things up. The 17th Annual RV SuperSaver Show in Fort Myers in mid-April and the Stuart RV Show in May are expected to continue drawing consumers interested in the RV Lifestyle.