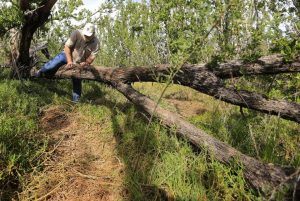 Botanist and author Roger Hammer climbs over one of the fallen buttonwoods that blocks the Rowdy Bend Trail at Everglades National Park.

It’s high season at Florida’s Everglades National Park, the cool months when tourists finally start to outnumber mosquitoes, and the simple construction of sawgrass, sky and clouds appears most beautiful. But not everything is so pretty.

According to the Miami Herald, near the main entrance in Florida City, drivers head into a visitor center parking lot worn down to gravel. Picnickers lunch near barricades and caution tape blocking steps to a shuttered dining hall at Flamingo, the park outpost on Florida Bay.

Shivering campers endure broken solar-powered showers at the only overnight accommodations more than a dozen years after a hurricane demolished the old Flamingo hotel and cottages, the promises to rebuild them still unmet.

On the southwest coast, a trailer greets visitors at the Everglades City entrance rather than a new welcome center first approved, but left unfunded, since the first Bush presidency.

Four months after Hurricane Irma buzz-sawed its way across south Florida, the state’s busiest national park is understandably still recovering. But the shoddy conditions date way before the latest storm. Over the decades, the park and two other vast national wildernesses in south Florida have amassed enormous maintenance backlogs, lengthy lists of fixes big and small, from derelict ranger stations and research buildings to rundown visitor centers and weathered chickees.

Everglades National Park claims the largest backlog by far, with the last official tally in July calculated at $88 million. With lost revenue following Irma and the recent government shutdown, that’s now likely higher. Across the state, the tab amounts to $254 million, according to an analysis by the Pew Charitable Trusts.

By another measure — the cost to totally replace aging facilities in today’s dollars — the tab soars into the billions, Pew found.

“They’re really starved,” New Jersey resident Tim Corlis said after a quick stop by Everglades’ battered amphitheater as part of a bucket-list journey to visit all the nation’s parks. “We’re very cognizant that the park service does a tremendous amount, with almost nothing.”