Editor’s Note: This year marks the 50th anniversary of the formation of Family Motor Coach Association (FMCA) on July 20, 1963, in Hinckley, Maine. FMCA recounts its early development in a story in the current e-newsletter in which the following article appears.

FMCA notes, “From its humble beginnings in a field at a gathering attended by 26 families who came together to view a solar eclipse and to share their interest in travel by “house car,” to its status today as the world’s largest organization for motorhome owners, FMCA has touched many lives over the years. The following article, penned by the late Bob Richter, provides a look at FMCA’s birth and infancy through the eyes of the man who had the insight to realize that a new era of travel had begun. Richter served as FMCA’s first president, in 1963 and 1964, and remained a strong proponent of FMCA and the motorhome lifestyle until his death in 1993. His wife, Jean, passed away in 2010.”

This is the first of two installments. Part 2 will appear on Wednesday.

It all started in our living room in Hanson, Mass., in January of 1962. My wife, Jean, and I were discussing with her sister, Charlotte Neves, the concept of taking our family of six to visit relatives on the West Coast, and Charlotte said, “With your crew, you’d need a bus! Why don’t you get one, and we all can go?”

It sounded like a great idea. While Jean was at a League of Women Voters’ national convention in Minneapolis, Minn., in early May, I went shopping and came home with an old Greyhound, a 1940 General Motors pusher with 2,600,000 miles on it. We converted it that spring in minimal style, and used it with great success that summer and fall with our four children.

During our bus-buying, we met John and Jean Samuelson, later to become F19, and at that time from Hingham, Mass., who introduced themselves by saying, “We’re the other bus nuts.” Next, we met Dr. George Whiting and his wife, Mary, later F7, of Abington, Mass., who had a converted Flxible.

In the early 1960s, “house cars,” as they were frequently called, were built from a variety of vehicles. Photo from FMCA archives.

The only flaw in our otherwise delightful summer was when we attempted to park our bus overnight on a family-owned waterfront lot at the nearby seashore. From the reactions of the town government, we quickly learned that we were not welcome there; perhaps this prompted our first feelings that an organization of folks whose interests in travel paralleled ours might be welcome and worthwhile.

Soon we found we were making a list of people with rigs similar to ours, and at Christmastime we sent our six-color hand silk-screened Christmas card to the eight families we then knew of who had similar vehicles, inviting them to send us the names of other converted bus owners. Everyone replied, and we found that we soon had a small, growing list that showed that a broad-based interest might be developing.

Accordingly, on April 24, 1963, we sent out a mimeographed letter inviting the 25 families we then knew of to meet at a suitable spot (not yet determined) in Maine, to watch the total eclipse of the sun which was to take place on July 20th. Through a fortuitous previous personal friendship we found a marvelous meeting place on a hilltop at the Hinckley School in Hinckley, Maine, 200 miles north of Boston. The spot was great for watching the eclipse, but lacked most of the amenities expected now of even chapter meeting places. 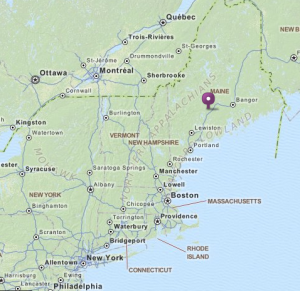 Purple button marks the location of Hinckley, Maine, site of the first FMCA gathering in 1963. Map courtesy of MapQuest.

On the way there in our bus with our family of six, plus Jean’s sister Charlotte — the initiator of it all! — and Marion Mott, later to become FMCA’s first office manager, we ran into a thundering deluge in Saugus, Mass.; our windshield wipers fell off in the middle of Route 1, and son Bill, then 6 years old, said, “Dad, you said we were going to Hinckley come hell or high water, right?” We were!

At Hinckley, we set up folding tables and chairs, strung recycled gas-station pennants from tree to tree for a festive note, and set up the abominable mimeograph for daily newsletters, a bulletin board, and two leaky and primitive toilet tents in a far corner.

It was an experience impossible to describe as we first heard — and then saw — the 26 coaches arriving, one after another, with our new friends. The coaches varied from a simple school bus on its fifth engine, with only a mattress, crib, and stove in it, to a lush executive coach costing well up into six figures. What a sight to see them coming up the hill! And what great people!

What took place at Hinckley, in starting FMCA, is written up in my quite uncharacteristically solemn prose in the first issue of Family Motor Coaching magazine. But it was just the beginning of a very busy late summer and fall. Under the direction of the nine-member Constitutional Committee chosen at Hinckley, we drafted and finalized the FMCA Constitution and Bylaws, including the Code of Ethics, and it was unanimously ratified by the membership of 65 on Dec. 15, 1963. It is a tribute to the foresight of this committee that much of the basic framework remains as valid today as it did then.

The first issue of Family Motor Coaching magazine went to members in February of 1964. Getting that first issue out was an experience in mad logistics. The type was set in Brockton, Mass., 8 miles from our home; carried to Hanson and proofed (for pasting up) on a rusty antique letterpress in a corner of our cellar, a few inches at a time, with the help of many friends, both old and new; then printed at the home of Dick and Nancy Parece, F22, in their cellar printshop in Natick, Mass., 40 miles away, two pages at a time; and then assembled by a crew of volunteers circling around the Whitings’ pool table in the cellar of their Abington, Mass., home, six miles away. The finished issues were trimmed in the cellar of a friend’s printshop in Hanover, Mass., five miles in another direction, and finally came above ground to be mailed at South Hanson, four miles in another direction.

We printed, if I recall correctly, about 500, and had to reprint it a few months later; it was again reprinted in a later issue of Family Motor Coaching as a center insert. First-edition copies, which include the Blue Bird color insert, are as rare as hen’s teeth now!

The second issue of the magazine was pasted up here at our home, with the type set at Natick and the issue run by a large commercial printer. It was an aesthetic delight but a financial disaster, and nearly squashed the whole fledgling organization. In all, we did four issues; the difficulties are advertised inadvertently on the front covers. The first is dated “February 15, 1964”; the second, “June, 1964”; and the third and fourth, “Fall, 1964” and “Spring, 1965”!

FMCA really became a national organization at its first national convention at Fort Ticonderoga, N.Y., in July of 1964, and offered us an opportunity to learn a great deal about how to set up a large meeting. With little experience to call upon, we were very lucky that it turned out so well, and that the 106 member families attending had such a great time. Future convention planners learned at Ticonderoga to avoid sites downwind from odoriferous paper mills, fields with hidden potholes that would swallow a motorcycle, and flies by day and mosquitoes by night that could carry off an innocent bystander! FMCA was in dire financial straits at Ticonderoga, and Ray and Anna Fritz, F4, and George and Mary Whiting, F7, went bus-to-bus soliciting donations to keep the organization afloat.

As FMCA grew and grew, it outgrew the room in our home where it had been housed, and we rented a small office at 1115 Main Street, South Hanson, for $65 a month. Soon we had three part-time employees, and the mail was coming in in baskets, sparked by write-ups in House Beautiful and other national magazines.

It was surely the case that, as FMCA grew, my personal fascination with the basic concept of the first totally new housing idea in 500 years — that of a self-propelled, self-contained, complete home on wheels — grew at equal speed. However, the electronics sales company I owned was paying our family’s bills but getting less and less of my attention and FMCA was becoming a totally demanding labor of love, never able to pay us for our work (which we would not have accepted anyway), or to repay us for our expenses.

By the Spring of 1965, FMCA had grown to nearly 1,000 member families in every state of the United States but one, and in Korea, Canada, England, Italy, Saudi Arabia, and Australia. I was forced to face the reality of a choice between one and the other. It was no contest — electronics had to win, and FMCA was incredibly lucky in having Ken and Dot Scott, F63, of Cincinnati, willing to take over, and to do such a great job in making it grow and prosper.

We put over a ton of office equipment, supplies, and files — and a couple of bottles of pink champagne for two marvelous people, Ken and Dotty — in a moving van headed for Cincinnati on Friday, March 12, 1965, and reluctantly went back to the job of making money and raising children.

It had been a pretty rough two years, but we had made a host of new friends, learned a lot, and had earned the satisfaction that comes from having tried to make the world a bit better place to live in, for everyone.