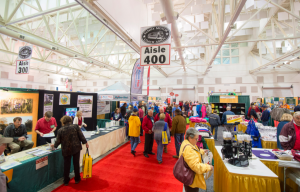 Despite less than favorable weather conditions, the Family Motor Coach Association’s (FMCA) 89th Family Reunion and Motorhome Showcase enjoyed an uptick in attendance and an overall upbeat atmosphere as the group gathered March 17-20 at the Georgia National Fairgrounds & Agricenter in Perry.

“We had a real downpour on Monday and then it’s been pretty chilly for Georgia,” FMCA Executive Director Jerry Yeats told RVBUSINESS.com this morning, noting around 6,000 members were on hand while another 2,000 people had passed through the gates. “But everybody truly seems unaffected. We saw a lot of participation in our seminars and tours, and we had a full house for our entertainment last night. The weather didn’t keep anybody down and we are having a great time.”

“I think the growth of the event mirrors what’s happening across the board in the industry,” Gould said. “As the industry rebounds, so does participation at our annual reunions.”

This marked the eighth time FMCA has traveled to Perry since 1996. According to Gould, this year’s edition also represented an increase from 2011 – the last time FMCA held the event at the Agricenter – that saw a coach count of 2,970.

“Perry is just a good fit for an FMCA event,” she said. “It’s laid out in such a way that it fills our needs, offering areas for seminars, a lot of indoor space and an outdoor area with plenty of flat, parkable space for displays, and a great venue for evening entertainment. The facilities are outstanding.”

While attendees enjoyed the slate of activities, manufacturers, dealers and supply vendors were also seeing steady traffic, according to Yeatts.

“The indoor displays were packed, in part because of the weather,” he said. “But the outdoor exhibits were also pretty busy. I even saw some sold signs, which is a good indication of a successful show.

“I think we’re seeing that our members are more actively looking for new motorhomes. That’s obviously a reflection of the economic rebound – people are just feeling better. But I think another big factor is that manufacturers are thinking out of the box. There are so many new innovations and gadgets, and it’s a result of the builders listening to the people that use their motorhomes and giving them what they want.”

The Deschutes County Fair & Expo Center in Redmond, Ore., will play host to FMCA’s 90th Family Reunion and Motorhome Showcase Aug. 13-16, representing the fifth time the organization has gathered at the facility.

Yeatts said that the organization also conducted a soft opening for its FMCA RVinsurance, a new program for members, during this week’s showcase.

“It will be a multicarrier, multiagency model that give more choices to the membership,” he said. “It will give them more coverage at better rates. The launch of the insurance program was really member-driven. We are delivering a product that they have been wanting for a long time.”