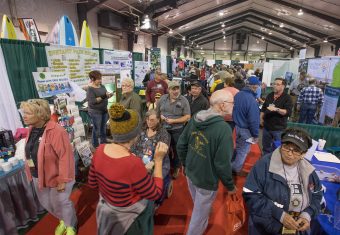 The buzz is back.

That, by and large, was the initial impression among opening day attendees at FMCA’s 97th International Convention and RV Expo as a sea of more than 2,700 motorhomes and 6,000 attendees descended on the Georgia National Fairgrounds & Agricenter in Perry, Ga.

In many respects, the Thursday-through-Sunday (Mar. 15-18) rally was reminiscent of the Cincinnati-based organization’s heyday here at one of its favorite national rally sites near I-75 outside of Atlanta.

Macon television affiliate WMAZ was calling the club’s semi-annual get-together an “RV show on steroids.” And in many respects the newscasters didn’t appear to be far off the mark with members of FMCA — known for more than 50 years as the Family Motor Coach Association and now going simply by the acronym FMCA – parking their coaches around the expansive grounds surrounding the fairgrounds where they’re participating in seminars, games, entertainment, social events and reviewing displays hosted by manufacturers and suppliers.

Aside from the resurgent crowds that harken back to the prerecession days when FMCA and other clubs were a more dominant factor in the RV consumer arena — a time when FMCA drew a record 6,600 to one of its convention — probably the biggest news in FMCA’s return to Perry this week is its inclusion for the first time of towable RV owners. A relatively small number were on hand for the opening day following a late 2017 vote by the club’s membership to invite them in as full-fledged members.

How that all goes over the long haul — whether owners of travel trailers and fifth-wheels will fully embrace the motorhome-centric club, and vice versa — remains to be seen. 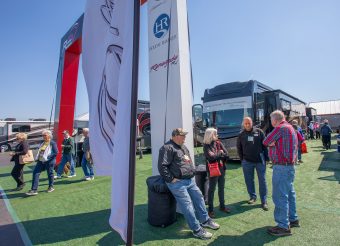 Indeed, some of FMCA’s members strolling through the aisles Thursday of the OEM exhibits clearly still have “mixed emotions.”

“Well, it definitely helps the FMCA because they needed more participation and it was slowly kind of dying out,” said FMCA member and motorhome owner Ruben Rivera, a retired engineer from Clermont, Fla. “However, it was originated as a Class A (motorhome) endeavor, so I kind of have mixed emotions about that. You know, I’m happy that the organization will be able to continue on because of the folks coming in. But, nevertheless, it does kind of dilute the original intent of the Class A (motorhome) family.”

Rivera’s friend, Gary Nicholson, a retired federal employee from Arcadia, Fla., offered a different view. “No, I have no issues with it,” said Nicholson. “I do agree that it does help keep FMCA large enough to be able to provide the kind of programs and benefits that it provides including reasonable discounts and really nice rallies like this. And that’s what it’s all about – to be able to enjoy yourself and enjoy your friends. So, I’m fine with it. I have no problems, no issues with it.”