Forecast: 'Frankenstorm' Damage to Top $1B 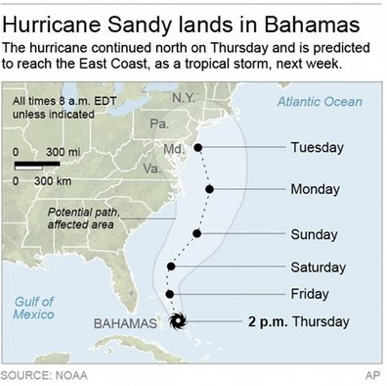 The pre-Halloween hybrid weather monster that federal forecasters call “Frankenstorm” is looking more ominous by the hour for the East Coast, and utilities and local governments are getting ready, the Associated Press reported.

Meteorologists expect a natural horror show of high wind, heavy rain, extreme tides and maybe snow to the west beginning early Sunday, peaking with the arrival of Hurricane Sandy on Tuesday and lingering past Halloween on Wednesday.

With a rare mix of three big merging weather systems over a densely populated region, experts predict at least $1 billion in damage.

The stage is set as Hurricane Sandy, having blown through Haiti and Cuba, continues to barrel north. A wintry storm is chugging across the country from the west. And frigid air is streaming south from Canada.

And if they meet Tuesday morning around New York or New Jersey, as forecasters predict, they could create a big, wet mess that settles over the nation’s most heavily populated corridor and reaches as far west as Ohio.