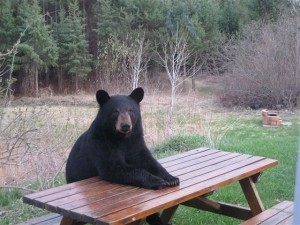 Car campers in the national forest of the upper Roaring Fork Valley in Colorado will be required to take extra precautions with food storage because of the potential for conflicts with bears, The Aspen Times reported.

The Aspen-Sopris Ranger District is drafting a “food-storage order” that requires coolers and other food containers to be stowed in locked vehicles when not in use, according to Martha Moran, recreation staff supervisor at the district. The order also will require campers to use bear-proof food boxes when available in campgrounds. The food boxes are available at Difficult Campground. They also will be installed at Weller Campground, Moran said.

The food-storage order will be enacted as soon as possible, Moran said. The Forest Service must go through a specific procedure to take action.

The Forest Service also wants campers to dispose of garbage in bear-proof containers at campgrounds or temporarily store it in locked vehicles at night or when a camp is unattended. Cooking equipment should also be secured.

The fine for violating the food storage order is $100. A food service order has never been fully implemented before in the Aspen-Sopris Ranger District, according to Moran.

The food storage order will affect campers at Difficult, Weller, Lincoln Creek, Lost Man and Portal campgrounds as well as the dispersed sites along Lincoln Creek Road and along Castle Creek Road. Signs will be posted to alert campers about the order and campground hosts will inform them.

No campers, whether car-camping or backpacking, should store food in their tents. The Forest Service recommends specific guidelines to backpackers about proper storage of food. Those guidelines are available at the Aspen and Carbondale visitor centers.

The Forest Service decided to issue the order after a second campground experienced problems with a black bear. A two-tone, cinnamon-colored male bruin weighing about 300 pounds got into a cooler at Weller Campground about 8 miles east of Aspen on Monday, Moran said. It is believed the same suspect was spotted numerous times last week and attempted to get into a tent at Difficult Campground, 6 miles east of Aspen.

The bear “pawed at another tent and snapped a pole” at Weller Campground, according to Kevin Wright, district wildlife manager with Colorado Parks and Wildlife. There was nothing in the cooler except a computer, Wright said, but the bear has learned to associate a cooler with food.

Moran said a trap was set in Difficult last week but the bear didn’t take the bait. The trap has been relocated to Weller, she said.

The Aspen-Sopris Ranger District temporarily banned use of tents and fabric trailers or campers last week after the bear sightings. No ban has been issued at Weller, a smaller campground with spaces more suited for tents than RVs and other campers, Moran said.

The Forest Service is being “proactive” with the warnings about bears in the Aspen area this year because there have already been two incidents, Moran said. There were five conflicts between bears and humans last year, she said.

The agency has been more active in warning campers about bears after 11-year-old Samuel Evan Ives was mauled in June 2007 in Uinta National Forest in Utah. A bear pulled the boy from the family tent and killed him. The family sued the Forest Service for lack of warning about earlier bear activity in the area. A judge in 2011 awarded the family $1.95 million.