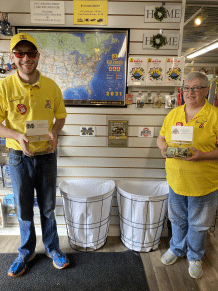 The Buckeye Lake/Columbus East KOA Holiday is hosting a can drive and is taking part in a friendly rivalry with the Detroit/Ann Arbor KOA
Holiday.

Buckeye Lake/Columbus East KOA Holiday, located just off I-70 and within a short walk to Buckeye Lake, is the Kampgrounds of America (KOA) park of choice for Buckeye fans looking for a weekend of activities for the whole family, according to a press release.

Buckeye Lake/Columbus East KOA Holiday has a long history of giving back to its community. Each year the team at Buckeye Lake KOA/Columbus East KOA supports Care Camps, a national non-profit that offers camping experiences for children with cancer. For the last few years, the campground has also hosted an annual can drive, picking a different charity to support each year.

This year, Buckeye Lake/Columbus East KOA Holiday has partnered with a former team member, Pastor Shyanne Manson at the Marne United Methodist Church Food Bank. The campground’s Community Manager, Rhonda Rees, stated that “Pastor Shyanne Manson was a team member here for five years and she always helped out with the can drive in the past. We just started this year, but people have been coming and donating. It’s great to see! And the whole football thing — well all I have to say is ‘Go Buckeyes!’”

The collection began Friday, Sept. 26, but already the team has been overwhelmed with the generosity of its guests and community. Campgrounds are a tight-knit community, so when the team at Detroit/Ann Arbor KOA Holiday got wind of Buckeye Lake KOA’s plan, they decided to lean into some friendly rivalry. 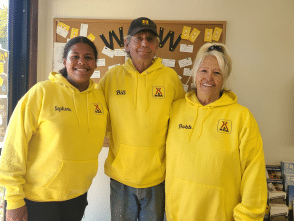 Located within a quick drive to the University of Michigan, Detroit/Ann Arbor KOA Holiday sees its fair share of Wolverine fans looking for a great place to stay for some game day fun.

Also an active supporter of Care Camps, the Detroit-area campground has partnered with Food Gatherers, a local food bank committed to ending food insecurity. Collections began a few days later than its Ohio rivals, but they are confident that their team, community and guests will rally behind their cause to make up for lost time.

According to Community Manager Todd Threat, “I feel so lucky because one of the huge priorities for the team here is how we can give back to the community. Tapping into the college football rivalry between Michigan and Ohio State was just a great and creative way to have fun while supporting a really important cause. This whole thing was organized by the team, and one team member in particular — Sam Beaster, so I just feel proud to see what they’ve been able to put together”.

Both campgrounds will be accepting donations until Oct. 31, and for every non-perishable item or dollar donated, one ticket will be entered into a drawing for the chance to win a $200 KOA gift card. When you make your plans for the next game day, be sure to stop by one of these amazing campgrounds — and don’t forget to pack some extra canned goods!