A crowd of friends, family and colleagues gathered last night (Feb. 20) at the Elcona Country Club in Bristol, Ind., to celebrate the official retirement of industry executive Gregg Fore, who stepped down as president of Elkhart supplier Dicor Corp. at the end of 2017, a little more than a year after he and his partners sold their interest in the firm to Wichita, Kan.-based Airxcel Inc.

Fore spent almost 20 years with Coachmen Industries Inc. and then Patriot Homes before going to work in 1990 as a sales manager for Dicor and eventually heading the company as president and co-owner.

An avid golfer and part-time resident of Augusta, Ga., who will be inducted into the RV/MH Hall of Fame in August, Fore is actually only semi-retiring, as the Purdue University graduate recently became a partner and chief revenue officer for Elkhart, Ind.-based G&G Media Group LLC, which publishes RVBusiness and Woodall’s Campground Management magazines.

Before Fore took the stage, several family members and colleagues addressed attendees, including master of ceremonies Anthony Wollschlager, who succeeded Fore as president of Airxcel’s Dicor division. In his opening comments – which were laced with a good-natured humor – Wollschlager described Fore’s exterior disposition as one of “confidence and wisdom” while, internally, he is “hyper-competitive and ultra-impatient.” 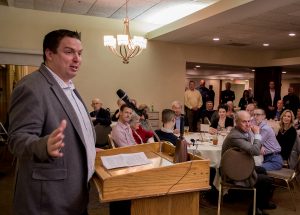 “What many people don’t see, however, is the passion Gregg has for helping others,” Wollschlager said. “Whether that is volunteering his time for several not-for-profit organizations, or counseling at the request of specific individuals, Gregg’s true gift is helping others. Most people associate Gregg’s giving with organizations such as the Ronald McDonald House, CAPS, and the Middlebury Boys and Girls Club. However, Gregg’s passion for helping others is often not seen and done behind closed doors.”

Mel Adams and Jeff Rutherford, Airxcel’s retired and current president, respectively, also stepped up to the podium. Adams mentioned that their longtime friendship began years ago when they shared a room at Pebble Beach, while Rutherford – before presenting Fore with VIP tickets for this year’s Master’s Golf Tournament – said Fore taught him “how to deal with people, how to interact with customers, how to put priorities in place and what’s important in business and in life; those are things that I learned from Gregg and I’m very grateful.”

Also toasting Fore was his father Pete Fore and sons, Alan and Brian. “What we learned from Dad and Mom both is professionalism, honesty, kindness – these lessons that make everybody a decent human being,” said Brian Fore. “And that’s what we got out of Dad’s career, and Mom’s as well, as she shared in it. And those are the things you never retire from.”

“It’s been fun to watch him,” said Pete Fore, a retired Coachmen exec. “And hopefully he learned some things from me along the way: Life’s short. Work hard. Keep your head up. Keep your mouth shut.”

Gregg Fore, in his turn at the podium, thanked his father and the rest of reception attendees who he said had impacted his personal life and professional career – singling out his wife, Nancy, his longtime partners, Dicor colleagues, industry friends and executives on hand for the reception from the Recreation Vehicle Industry Association (RVIA), a Washington, D.C.-based trade association for which Fore served as a board member for 19 years and chairman from 2010 to 2012.

“There are people in this room who also taught me to be a better giver of things to others, and I’m going to start with my wife. She taught me how to be a giver, and how to care about others,” Fore said. “This night … well, it’s about me, but it’s not about me. It’s about every one of you here and what you have touched me with, touched others with. Expand what it is you do. Be in somebody else’s life and make them better. We’ll all be better. I’m a believer in that.”