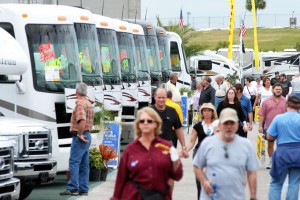 Coming off a strong growth year for the RV industry, it’s no surprise that the outlook for the 2015 Florida RV SuperShow, slated for Jan. 14-18 at the Florida State Fairgrounds – the first major retail show of the new year – is so upbeat.

“We’re at least as strong as we’ve ever been as far as our manufacturer space sales and our supplier booths,” reported Lance Wilson, executive director of the sponsoring Florida RV Trade Association (FRVTA). “And also with our rally, we’re probably going to be close to 800 coaches at our rally, which is as much as we’ve ever done. We’ve opened up a couple of fields that are more remote to try and handle the rally coaches that want to stay with us during the show.”

Wilson tells RVBUSINESS.com that SuperShow exhibitors will easily fill the sprawling Tampa facilities to the max or, at least, to the extent that FRVTA would care to fill them. “If we had another building, we could sell another 150 booths, no question,” he said. “But the thing with booth space is they have to be in high traffic areas. It’s better to limit the amount of space but have it be very high traffic, which is what we do.”

Wilson agrees that the show’s strong exhibitor participation appears to signal a continued uptick in business for the industry, at least on a regional level. “I think everyone in Florida is really enthused about the situation as a whole,” he said. “Of course, everybody has their own issues state by state, but overall it’s looking good.”

While most of the show format and layout will closely resemble previous years, FRVTA is adding a special feature for 2015 that it hopes will resonate with attendees and draw traffic. In partnership with the Vietnam Veterans Memorial Fund (VVMF) the state association will host a half-scale replica of the Vietnam War Memorial called the “Wall that Heals.”

“We were working with the state fair where we hold the show and they were talking about having it out at their event in February and we thought that it would be a perfect fit for our group,” said FRVTA Marketing Director Dave Kelly. “It’s a pretty involved process in landing that thing, so we just started filling out the paperwork. We’ll be their first event of the year. They’re coming right from Iowa.”

In addition to being a good fit for the Tampa Show demographic, Wilson says the Vietnam exhibit provides a memorable aspect that will help improve what’s shaping up to be strong show.

“With a show of our size and the way we move our traffic, there’s always areas of concern as far as getting traffic to them,” he said. “And this fills out the west end of our show very dramatically, as well as all the things that come with the wall in terms of patriotism and honoring our veterans.”