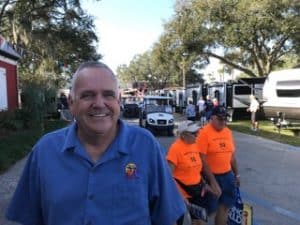 Expectations are high for the 35th annual Florida RV SuperShow in Tampa which kicked off Wednesday (Jan. 15) and runs through Sunday.

“So far, what we’re seeing are long lines and fantastic weather, so we’re anticipating another record crowd,” said Dave Kelly, director of marketing for the Florida RV Trade Association (FRVTA), which organizes the event.

“Tuesday was industry day,” he added, “and everyone was very excited. Everyone is expecting a very big show.”

The “Tampa Show,” as it is known informally, has long been considered a barometer for how the RV retail season will play out. Last year’s event drew more than 74,000 attendees – a record – and this year is expected to exceed that number.

“Our fall shows were all very successful, so we’re anticipating it will carry over,” Kelly said, emphasizing that the weather is expected to remain “fantastic,” which helps drive attendance.

The event at the Florida State Fairground boasts more than 400 indoor exhibitors. More than 75 RV manufacturers – representing virtually every brand the industry – also are on hand. Kelly noted that while the show is in Florida, nearly half of those attending don’t live in Florida.

“What we really have is a picture of the East Coast of the United States,” he said.