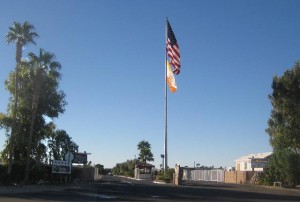 Aaron Quiroz, 22, a member of the Okietown street gang who goes by the name of Little Chief, was advised by Justice of the Peace Pro Tem Yolanda Torok during his arraignment in Yuma Justice Court that the county attorney’s office was reviewing the case to determine what, if any, charges would be filed, the Yuma Sun reported.

Torok explained to Quiroz that the county attorney’s office has 48 hours to make the decision whether to file a criminal complaint against him. She set his next court date for 1 p.m. Monday and his bond at $64,137.

Quiroz is being held in the Yuma County jail on two new felony charges of unlawful flight from law enforcement and endangerment, and a misdemeanor charge of criminal trespass. The warrant he was being sought on was for driving under the influence and a probation violation.

According to Yuma police, at about 6:26 p.m. Wednesday, officers spotted a white Toyota Camry driving recklessly through the intersection of 32nd Street and Avenue 8E, nearly colliding with three separate vehicles.

As the officers were pulling around in an attempt to catch up and conduct a traffic stop on the Toyota Camry, which was headed westbound on 32nd Street, the vehicle went into the sandy desert area on the south side of the street in the 7700 block.

When officers pulled up, they saw the driver, now identified as Quiroz, running from the vehicle south through the desert, and began to chase him on foot. Quiroz ran into the trailer park at 7201 E. 32nd St.

Officers set up a perimeter on the trailer park and with the assistance YCSO and the Border Patrol conducted a trailer-to-trailer search of the RV park. Some trailers were temporarily evacuated for the safety of those residents.

Officers attempted to contact Quiroz using a P/A system, but he refused to come out from where he was hiding. They found him at about 10:45 p.m. hiding in a shed next to a trailer on the south side of the park. Quiroz was taken into custody without further incident.

This is not the first time officers and Quiroz have been involved in a standoff situation. In early February Quiroz barricaded himself inside a mobile home for three hours and refused to come out until Yuma police fired tear gas into the residence. In that incident, Yuma police were serving a search warrant at 1640 W. 8th St. to look for evidence in a gang-related incident a few weeks before.

After arriving, officers made contact with a man and a woman outside of the home. During that conversation, they noticed there was still another man inside.

Quiroz refused to come out of the trailer and barricaded himself inside. Police tried to negotiate with him using a megaphone and by telephone but could not convince him to come out. The adjoining trailers were evacuated for the safety of the residents, and YPD’s Special Enforcement Unit (SEU) was called to the scene to assist with situation.

Finally, at 11:26 p.m., after about two and a half hours, the SEU fired tear gas into the trailer, at which time Quiroz came out and was taken into custody.