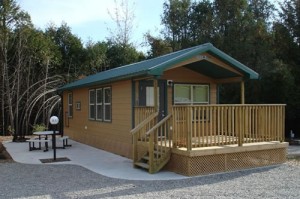 The two companies signed an exclusive leasing and financing program for rental cabins being produced by General Coach Canada in Hensall, Ontario, according to a news release.

“The incredible response to our line of rental cabins since their launch in the summer of 2008 has been unprecedented,” said Roger Faulkner president of General Coach Canada.

Faulkner stated, “When the RV industry started to slow down in 2007, 2008, the writing was on the wall as to the future of General Coach Canada. We had to look outside the park for other products that we could build.”

The other product that General Coach Canada chose to pursue is simply an extension of the top of the line recreational park trailer it was already manufacturing.

“We knew we had a winner when we were chosen as a “Preferred Vendor” for KOA (Kampgrounds of America Inc.) to build lodges for their Canadian franchisees,” he said.

The major challenge for most campgrounds today is to locate the extra cash needed, which will enable them to purchase the cabins. This predicament is prevalent due to the fact that most banking institutions in Canada routinely struggle to understand the campground model.

Nationwide Leasing has established a proven track record when it comes to leasing equipment to the hotel and lodging industry over the past 20 years and were anxious to entertain a lease to purchase plan for all General Coach Canada’s clients.

The lease-to-purchase plan being launched will allow all campgrounds to now enter the extremely lucrative rental market.